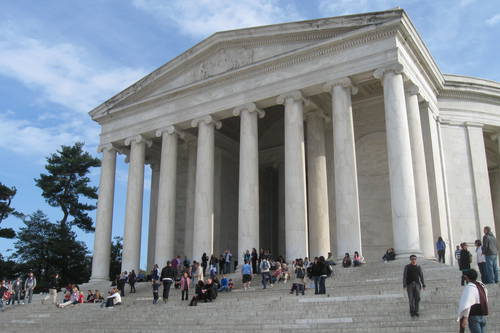 AAA/Greg Weekes
2 Photos
AAA Editor Notes
Thomas Jefferson Memorial stands on the s.e. bank of the Tidal Basin. It honors the country's third president, the author of the Declaration of Independence and the founder of the University of Virginia, a man who also was an architect, book collector, diplomat, inventor, musician, scientist and political philosopher. During his two terms as president, Jefferson negotiated the 1803 Louisiana Purchase, which nearly doubled the size of the United States, and sponsored the monumental expedition of Meriwether Lewis and William Clark to the Pacific Northwest, which paved the way for 19th-century westward expansion.

A grand series of steps leads to the portico that opens into the rotunda, where a circular dome is supported by Ionic columns. Designed by John Russell Pope, the memorial was modeled on the Pantheon in Rome. The focal point of the interior space is Rudolph Evans' 19-foot-tall bronze statue of Jefferson, clad in a long, open coat over a button-down vest. Panels on the white marble walls are inscribed with some of his most significant writings.

In November 1939 President Franklin D. Roosevelt laid the cornerstone for the memorial, and he dedicated it on Apr. 13, 1943, the 200th anniversary of Jefferson's birth. A plaster model of the statesman's likeness stood in place of the bronze statue until metal restrictions were lifted after World War II. The memorial's beauty is enhanced in late March or early April, when the Yoshino cherry trees lining the Tidal Basin are swathed in clouds of pale pink blossoms; during these few days there may be no lovelier spot in Washington.