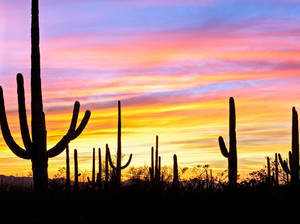 About AjoThe name Ajo (ah-ho) comes either from the Tohono O'odham word for “paint” or the Spanish name for “garlic,” a fitting moniker for this multicultural community with an emerging arts scene. Home to the first copper mine in the state, Ajo did not boom until ore-refining methods made the mining of low-grade ore profitable in the early 1900s.

In 1906 Col. John Greenway formed the New Cornelia Copper Co., which was eventually purchased by one of the nation's largest copper companies, Dodge Corp., in 1921. Visitors to the town can view the New Cornelia Open Pit Mine on Indian Village Road. The mine, which was shut down in 1984, is nearly 2 miles in diameter and 1,000 feet deep. Open October through May, a visitor center features a video and display of the mining operations as well as an observation area; phone (520) 387-7742.

Organ Pipe Cactus National Monument, 32 miles south of Ajo, preserves a portion of the Sonoran Desert; its inhabitants include the statuesque organ pipe cactus as well as such desert foliage as saguaro, paloverde and ocotillo.

As in much of the southwest, the Spanish and Native American influences can be seen in Ajo's Spanish Colonial Revival town square surrounded by a park, mission churches and Southwestern-style buildings. The Ajo Historical Museum , 160 W. Mission Rd., is housed in a mission church built in the 1930s; phone (520) 387-7105. Other historic buildings include the 1919 Curley School, 201 W. Esperanza Ave., offering live-work lodgings for artists, and the historic 1916 Ajo Train Depot, formerly used by the Tucson, Cornelia and Gila Bend Railroad and now housing the chamber of commerce visitor center, 1 W. Plaza St.