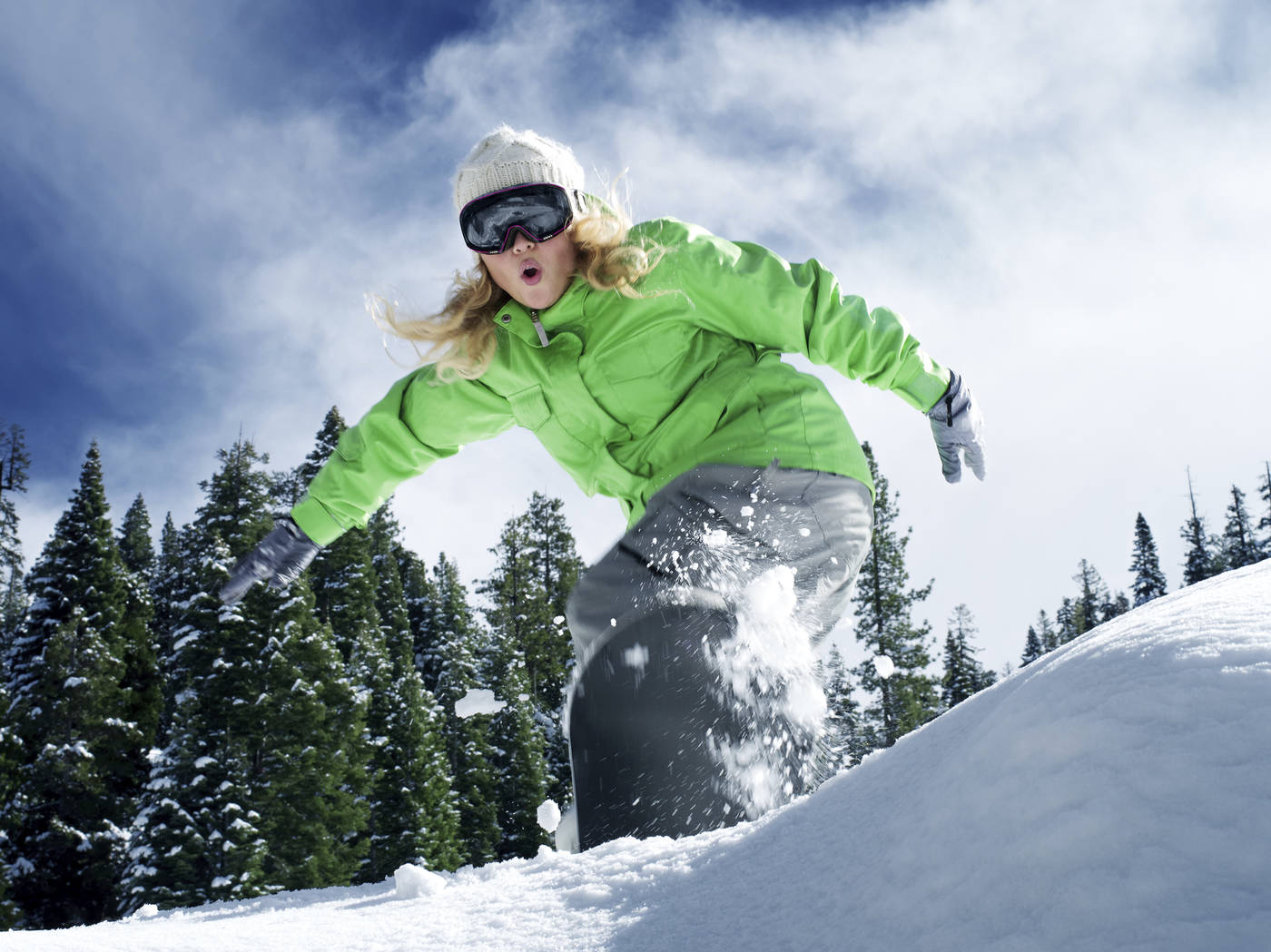 Recreation in Banff National ParkBiking, swimming, backpacking, fishing, hiking—whatever your interest, make sure you experience these activities and top things to do in Banff, as chosen by AAA travel editors.

Banff National Park is an outdoor lover's delight, with many recreational options and adventurous things to do year-round. Hiking, the most popular way to reconnect with nature (and the main reason visitors come to the park), can be enjoyed from June through October. From a short stroll in the town of Banff to an all-out, full-day trek through the Canadian Rockies, the national park's 1,609 kilometres (1,000 mi.) of trails can accommodate all endurance levels.

Your first stop should be at the Banff or Lake Louise information centers, where Parks Canada personnel will help you choose hikes in the national park that are right for you. They can also give you up-to-the-minute information about trail conditions, wildlife sightings and the weather. 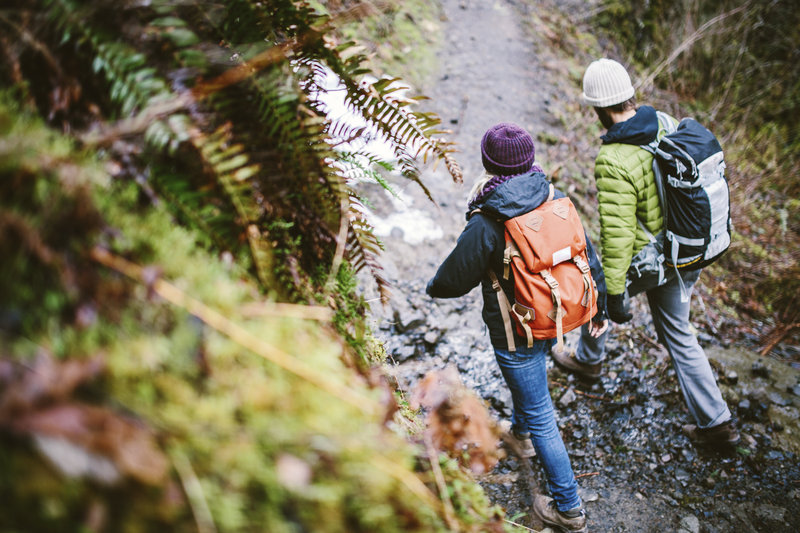 AAA/iStockphoto.com
Hiking the Bow River Trail is a perfect introduction to the picturesque village of Banff. The easy 7.1-kilometre (4.4-mi.) loop follows the beautiful Bow River as it winds through town, providing scenic views of Bow Falls, Fairmont Banff Springs , hoodoos and assorted mountains. You can access the trail from several points, including Central Park and Surprise Corner.

If you'd like to be able to boast, “I climbed a mountain in the Canadian Rockies,” then consider the Tunnel Mountain Trail. Beginning on St. Julien Road near The Banff Centre, the trail, a 4.5-kilometre (2.8-mi.) round-trip, affords views of the townsite, Vermilion Lakes and other nearby peaks.

The Fenland Trail (a fen is a type of wetland) is an easy, flat 2.1-kilometre (1.3-mi.) loop that begins just outside the village of Banff. Take Mount Norquay Road north from town to the Forty Mile Creek picnic area. Hikers can learn about the area's ecology as they follow the trail through a spruce forest and along Echo and Forty Mile creeks. Wildlife commonly spotted include elks, beavers and Canada geese. (Mama elks are partial to the site, and the trail may be closed late May to early June during calving season.)

Sunshine Meadows' alpine setting atop the Continental Divide offers spectacular views of surrounding mountain peaks. The meadows, known for their explosion of wildflowers in July and August, can only be reached by shuttle (or a long hike) from Sunshine Village Ski Resort . Although several hike options are available, the rolling terrain makes for a fairly easy 2.5-kilometre (1.6-mi.) one-way hike to Rock Isle Lake on the British Columbia side of the divide. 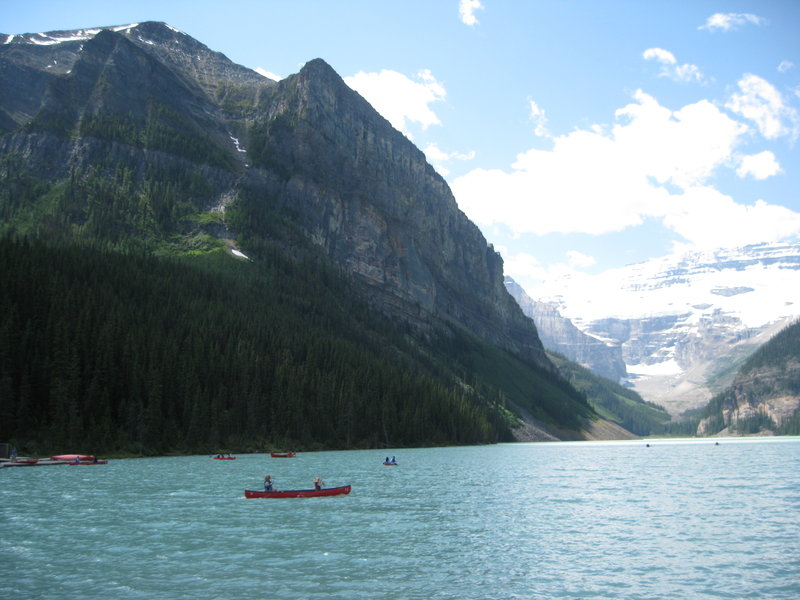 AAA/Frank Swanson
After reveling in the majesty of Lake Louise and Moraine Lake, escape the crowds and take a hike to more fully explore their beauty. Head out on the level Louise Lakeshore Trail, one of the park's most popular things to do, for 3 kilometres (1.8 mi.) for better views of the mountains that surround the lake. At the back of the lake by Mount Victoria and Victoria Glacier, you can pick up the Plain of Six Glaciers Trail and continue upward for views of a rocky creek flowing below, moraines, fields of gravel and the promised six glaciers. Your reward at the 5.5-kilometre (3.4-mi.) point from the trailhead is a teahouse, built in the 1920s by the Canadian Pacific Railway, where you can stop in summer for a breather and refreshments (cash only). 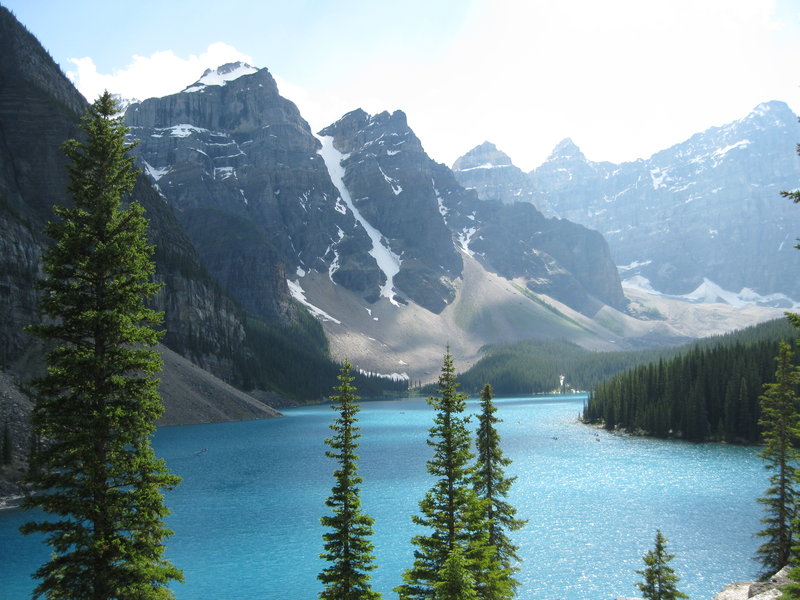 AAA/Frank Swanson
Amazingly enough, you can get one of the best views of Moraine Lake and the Valley of the Ten Peaks by a short .8-kilometre (.5-mi.) round-trip hike to the top of a rock pile; the trail begins at the parking lot for the lake. The Moraine Lakeshore Trail, which also begins at the parking lot, is an easy 2.4-kilometre (1.5-mi.) round-trip walk along the lake's western edge, culminating at a viewpoint for yet more spectacular photos of the serene lake. 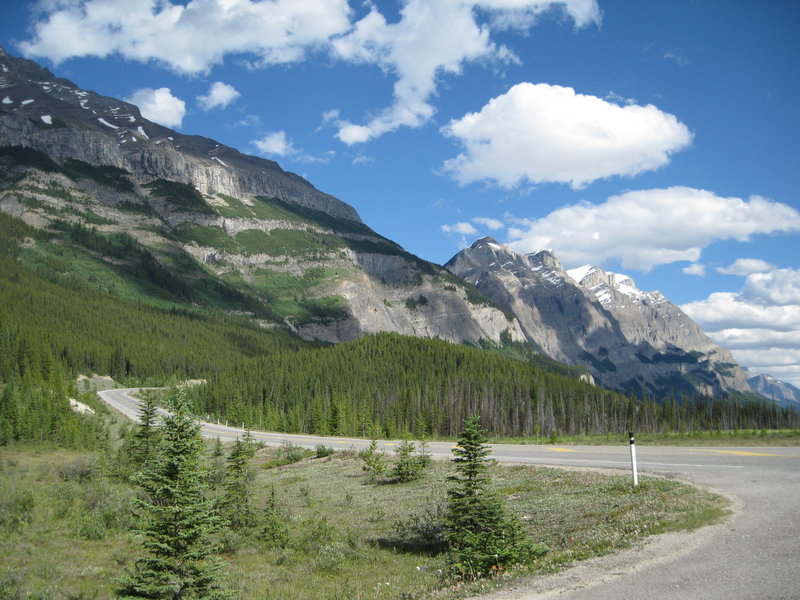 AAA/Frank Swanson
For awesome mountain panoramas and breathtaking views of the Saskatchewan Glacier, part of the Columbia Icefield, take the pull-off from the Icefields Parkway (Hwy. 93) just 4 kilometres (2.5 mi.) before Banff National Park transitions into Jasper National Park. Be sure to take a windbreaker with you for the moderately difficult 4.8-kilometre (3-mi.) round-trip hike up the Parker Ridge Trail. This hike takes you from a spare subalpine forest to rocky alpine slopes.

Get On the Water, Not In It 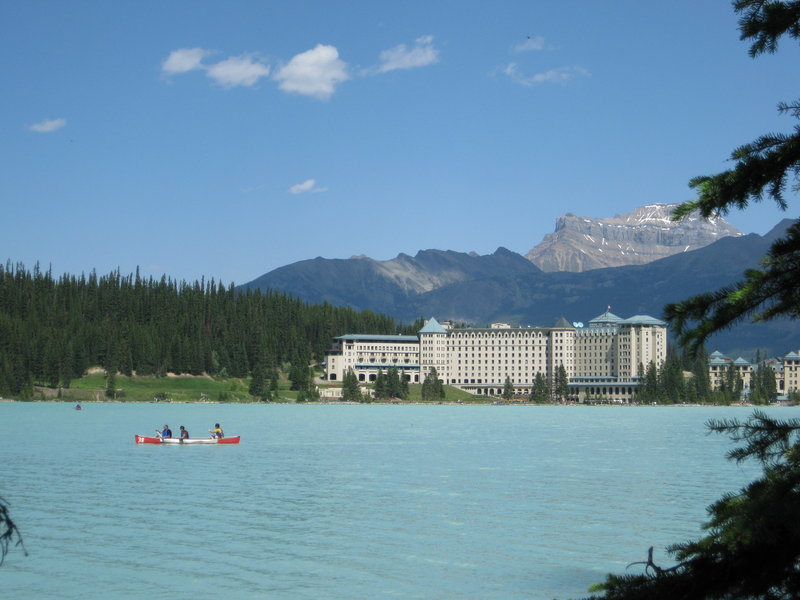 AAA/Frank Swanson
Don't even consider swimming in any of these icy cold mountain lakes. As an example, on the warmest day of the year, Lake Louise is no more than 4 C (39 F). You can, however, canoe, kayak or row to your heart's content on all park lakes; motorized boats, however, are only permitted on Lake Minnewanka. Easily accessible lakes include Two Jack and Johnson, both near the village of Banff; Lake Louise ; Moraine Lake; and Herbert, Hector and Bow lakes, reachable from the Icefields Parkway. Canoes can be rented in the town of Banff and at Lake Louise and Moraine Lake.

Raft on a River 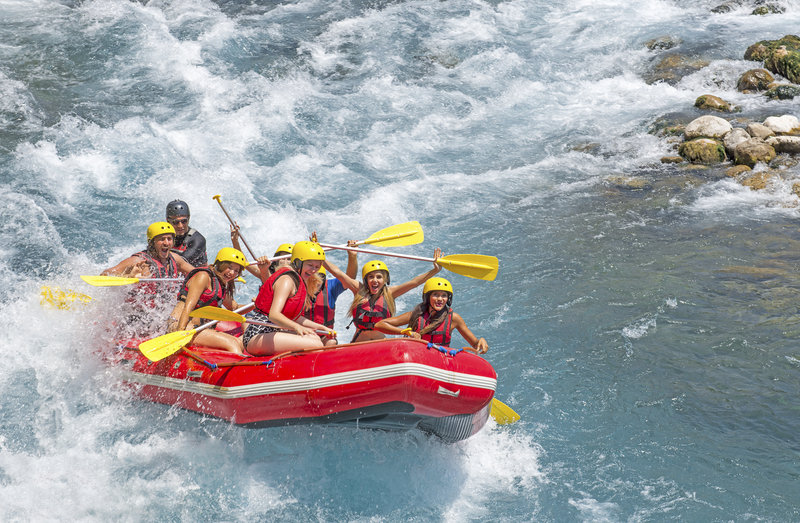 ozgurdonmaz/iStockphoto.com
Although guided float trips on the Bow River are offered by several companies in the town of Banff, those seeking the thrills of white-water rafting will have to venture outside the park boundaries. In nearby Canmore , about 24 kilometres (16 mi.) east of the town of Banff, Inside Out Experience runs half-day trips on the Kananaskis River and through Horseshoe Canyon on the Lower Bow River. They also offer full-day trips on the Kicking Horse River, with pick-ups available in Banff; phone (403) 949-3305.

Guided horseback-riding trips, available from several operators in the town of Banff and the village of Lake Louise, include morning breakfast rides, trips along the Bow River and Bow Valley, around Lake Louise and to the Lake Agnes and Plain of Six Glaciers teahouses. 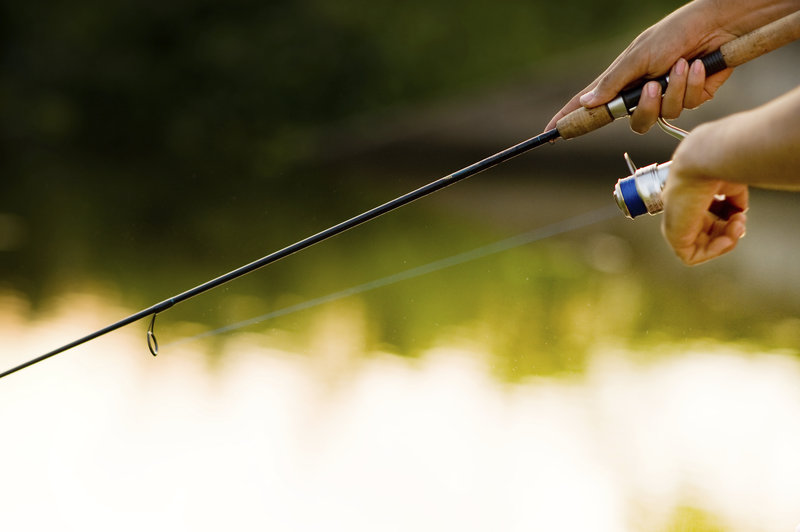 woraput/iStockphoto.com
Fishing is permitted in the park, though cold lake temperatures severely limit fish populations. Whitefish and several species of trout, including brown, brook, lake and rainbow, can be found in lakes Minnewanka, Ghost, Johnson, Two Jack and Vermilion, and fly-fishing in the Bow River is popular. Fishing permits are required and can be obtained at the Banff and Lake Louise visitor centers as well as at campgrounds and some retail outlets.

Ski or Snowboard in Winter 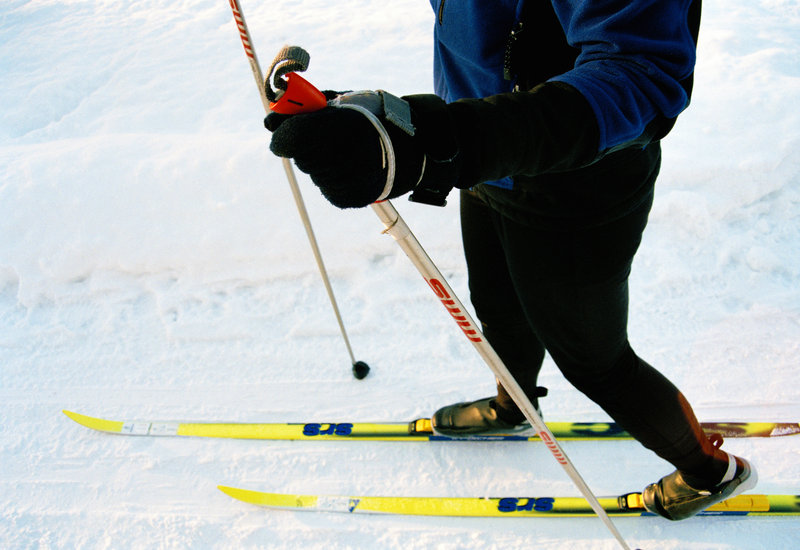 age fotostock/Martin Diebel
When the weather turns cold, the national park turns into a winter wonderland. The mountains, which are beautiful in summer, become an idyllic destination when enrobed in snow. Outdoor enthusiasts flock to the park's three ski resorts between November and May for skiing and snowboarding. Lake Louise Ski Resort , the area's largest, has 139 runs for skiers of all abilities. Sunshine Village Ski Resort has three mountains where the snowfall averages 9 metres (30 ft.), and Mt. Norquay is the only area resort to offer night skiing. Cross-country skiing trails, from beginner level to more difficult, are concentrated around the Banff village and Lake Louise areas. 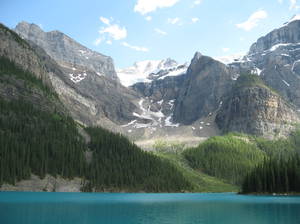