More About
Cape May, NJ
HotelsAttractionsRestaurantsCampgrounds

About Cape MayHave you ever wondered how Cape May got its name? Explorer Cornelius Jacobsen May, sent by the Dutch East India Co. to explore the then-mysterious East Coast, found the climate “charming” and lent his moniker to the shore area.

Victorian gingerbread is a recurrent architectural theme; the prevalence of well-preserved late 19th-century structures led to Cape May being designated a national historic landmark in 1976. Representative of this florid style is the Emlen Physick Estate. The Pink House on Perry Street exemplifies the ornate “wedding cake” architectural style.

At New Jersey's southernmost tip, Cape May is one of the oldest seashore resorts on the Atlantic Coast. During the first half of the 19th century it rivaled Newport, R.I., as a favored summer retreat for Philadelphia and New York socialites. Presidents Buchanan, Grant, Harrison and Pierce were among the notables who vacationed here. Another, more infamous visitor was pirate Captain Kidd, who filled his water casks near Lily Pond.

In addition to the pleasures of the beach and the amusements of the promenade, Cape May offers good boating and fishing. Various craft can be rented for fishing in the ocean or in Delaware Bay. Rockhounds pursue their interest also; the tide-worn quartz pebbles known as “Cape May Diamonds” can be found on the beach at nearby Cape May Point and along lower Delaware Bay.

Those who prefer entertainment rather than sand with their food should try Elaine's Famous Dinner Theater at Elaine's Victorian Inn, 513 Lafayette St.; phone (609) 884-4358. Visitors also can enjoy a number of special events throughout the year. Three major celebrations are the Cape May Food and Wine Celebration in September; Victorian Weekend, a 4-day festival held in October; and Christmas Candlelight House Tours in December, a self-guiding tour of fancifully decorated Victorian inns, hotels, guesthouses and churches.

At Cape May Point State Park, 1.2 miles west via Sunset Boulevard (CR 606), is the historic Cape May Lighthouse, erected in 1859. The state park is one of three prime bird-watching areas adjacent to Cape May Bird Observatory in nearby Cape May Point. Higbee's Beach Wildlife Management Area and Cape May Migratory Bird Refuge are other observation points.

The World War II Lookout Tower, formerly Fire Control Tower No. 23, off Sunset Boulevard on the state park grounds, is one of two artillery lookout towers remaining in the area and the only one accessible to the public. Interpretive signs at each level along the ascent to the top (via a spiral staircase) provide background about the tower's history and purpose; phone (609) 884-5404 or (800) 275-4278.

Explore this charming community with guided tours conducted by the Mid-Atlantic Center for the Arts & Humanities. The organization's Cape May Trolley Tours features the historic district as well as carriage tours, historic house tours and guided walking tours that depart from the Washington Street Mall information booth.

Of special interest in nearby Cold Spring is The Cemetery at Cold Spring Presbyterian Church, where the oldest grave dates to 1742 and the present church building to 1823; phone (609) 884-5130 or (609) 884-4065. Also nearby, north of Cape May near Rio Grande, is the Naval Air Station Wildwood Aviation Museum. This former training facility for dive-bomber squadrons during World War II remembers the Navy airmen who died during training; phone (609) 886-8787.

The Cape May-Lewes Ferry runs daily between Cape May and Lewes, Del. The New Jersey terminal is at the junction of Lincoln Boulevard and US 9, about 2.5 miles west of the southern end of the Garden State Parkway. The 17-mile trip takes 85 minutes. Reservations are recommended and should be made at least 1 day in advance; phone (800) 643-3779.

Things to Do Cape May Lighthouse 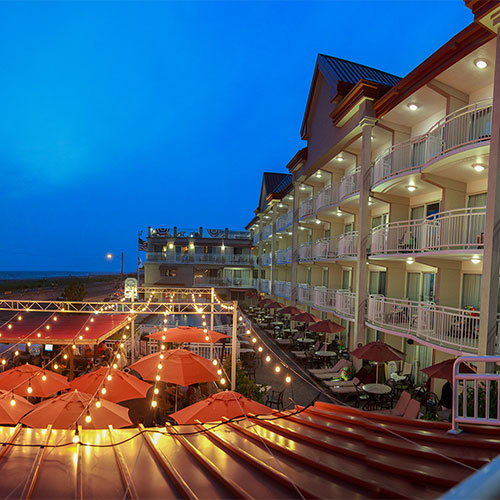 AAA Rate from
Icona Cape May