About Colima, ColimaTravel Advisory: We do not recommend travel to the state of Colima due to the U.S. Department of State’s “Do Not Travel” warning. The acute level of crime and violence in this area prohibits AAA inspections.

Although the city of Colima (koh-LEE-mah) is little visited, it makes a very pleasant day trip from Manzanillo and a nice break from the beach. The 70-minute drive—via the Manzanillo-Colima toll highway to the town of Tecomán, then north on Mex. 110—passes beautiful tropical and mountain scenery. If you don't have a car, trips to Colima can be arranged through travel agencies at Manzanillo resorts. The toll fee is about $6.75 (U.S.); have pesos on hand to pay the charge.

Colima itself lies in a fertile valley. Although tropical in appearance, it is cooler than the lowlands along the coast. The Río Colima divides the city in two, running through tropical fruit orchards and clusters of coconut palms (the region is an important producer of coconuts, bananas and lemons). Entering the city via Mex. 110 from Manzanillo, the first landmark visitors see is the King Colima Monument, a sculpture erected in 1955.

What makes Colima especially enticing—besides the notable cleanliness of its streets and parks—is the carefully preserved colonial atmosphere of the town center. Many of the downtown buildings were constructed in the neoclassic style during the later years of dictator Porfirio Díaz's regime. Earthquakes in 1932 and 1944 leveled some of the structures, which were later rebuilt.

Jardín Libertad, the main plaza, is located between avenidas Francisco I. Madero, Miguel Hidalgo, Santos Degollado and Reforma. The plaza, landscaped with palm trees and tropical shrubs, has walkways lined with white wrought-iron benches and fountains shooting streams of water. A domed gazebo stands at its center. Beneath arcades on the north and south sides of the plaza are shops and commercial businesses.

The Government Palace is on the plaza's east side. Bordering the west side is the cathedral (Catedral Basilica Menor de Colima), built by the Spanish in 1527 and subsequently rebuilt several times. The Hidalgo Theater (Teatro Hidalgo), a block southwest of Plaza Principal at the corner of Degollado and Independencia, was completed in 1883 and reconstructed after earthquakes in 1932 and again in 1941. The opulent interior has a 19th-century elegance. For theater schedule and ticket information phone (312) 312-1231.

Four blocks east of the main plaza between avenidas Benito Juárez and Revolución is Jardín Nuñez, a park with lush greenery that makes it a good spot for relaxing. For lunch try Samadhi, about 2 blocks north of Jardín Nuñez on Avenida Filomena Medina (where it branches off Avenida Juárez). This vegetarian restaurant has a shady courtyard and serves a tasty, inexpensive comida corrida. Have a licuado (fruit shake) or juice rather than taking a chance on the water.

Just south of the House of Culture complex, on the east side of Calzada Pedro Galván, is Piedra Lisa Park (Parque La Piedra Lisa). The name means “sliding stone,” and those who do slide on the namesake rock will supposedly return to Colima one day.

The Main Bus Terminal (Central Camionera Foránea), also called Terminal Nuevo, is a little over a mile east of the city center via Avenida Guerrero to Avenida Niños Heroes.

About 7 kilometers (4 miles) north of Colima (via Avenida Herrera out of town) is the village of Comala (“the place of the griddles”). It's a quick trip by car or bus; “suburban” buses leave from the Central Camionera Suburbana station at Plaza Colimán, on the western outskirts of town via Carretera a Coquimatlán.

Comala was once known as El Pueblo Blanco (“The White Town”) for its white buildings (although with red-tiled roofs). Passing time in the central plaza, with its benches and shade trees, makes for a pleasant afternoon outing. A group of small restaurants on the plaza's south side serve a variety of botanas, or appetizers, for the price of potent Mexican libations. As the afternoon lingers on, the square fills with the sound of music as mariachi bands try to outdo each other for customers' business.

Twin volcanoes just 3 miles apart are the focus of Volcán Nevado de Colima National Park, about 40 kilometers (25 miles) north of the city via Highway 16 (the road to the villages of Comala, Suchitlán and San Francisco). Dormant Volcán Nevado de Colima, 14,365 feet tall, has flanks cloaked with forests of conifers.

Neighboring Volcán de Fuego, 12,989 feet tall, on the other hand, has acted up numerous times since a disastrous eruption in 1941. The most recent major outburst occurred in June 2018, spewing rocks and lava, necessitating the evacuation of nearby villages and creating spectacular night scenes for intrepid photographers.

From May through July orchids line the paved, winding road to the tiny village of San Antonio, just outside the national park. The clear, dry winter months, when the volcanoes are snowcapped, is the best time for viewing them. Experienced mountaineers often hike or climb to the summit of Nevado de Colima. 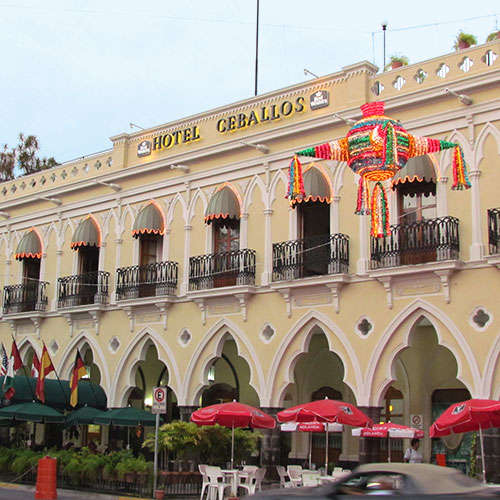