Best Attractions in DallasIn a city with dozens of attractions, you may have trouble deciding where to spend your time. Here are the highlights for this destination, as chosen by AAA editors. GEMs are “Great Experiences for Members.”

Managed by The Sixth Floor Museum, the stark John Fitzgerald Kennedy Memorial is just east of the assassination site. Though area residents completely funded the project, not all Dallasites were happy with the result: a square, roofless cenotaph consisting of concrete walls that one architectural critic likened to “mammoth Lego blocks.” But despite the controversy, this simple monument, as its commemorative marker attests, “stands as a permanent tribute to the joy and excitement of one man's life.”

Kennedy family friend Philip Johnson designed both Dallas' JFK memorial and Thanks-Giving Square, an urban park dedicated in 1976. The latter, highlighted by waterfalls, reflecting pools and a meditation garden, conveys the principle of gratitude in the midst of the city's bustling downtown. Besides contemplative sightseers, the site harbors a small, spiral tower—topped by the resplendent Glory Window, one of the world's largest horizontally mounted stained glass pieces—and the Wall of Praise, which includes a vibrant mosaic based on Norman Rockwell's “The Golden Rule.”

Mary Kay Ash considered the Golden Rule to be the founding principle of her cosmetics business, launched in Dallas in 1963; her glamour company “with heart” is today a multibillion-dollar global enterprise. From pink beauty palettes to iconic pink Caddies, The Mary Kay Museum —located in the lobby of Mary Kay World Headquarters, a 13-floor pink granite building in Addison —chronicles the evolution of the highly successful direct sales enterprise.

It's plain to see why geophysicist Everette Lee DeGolyer and his wife, Nell, a respected civic leader and philanthropist, built their home on the southeastern shore of White Rock Lake. The idyllic estate—now the Dallas Arboretum and Botanical Garden —affords handsome views of the scenic body of water and, just beyond, downtown Dallas. Today, green-thumbed visitors gleefully amble through this 66-acre site's colorful, flower-speckled patches. Seasonal concerts and special events also are offered at the AAA GEM attraction, as are guided tours of the DeGolyers' former residence, a Latin Colonial Revival-style structure completed in 1939.

Giggles and excited squeals mingle with roars, grunts and neighs at the Dallas Zoo, a AAA GEM attraction founded in 1888. At the entrance to the 95-acre park, a 67.5-foot giraffe—purportedly the tallest statue in Texas—welcomes hordes of two-legged creatures and their young to the stomping grounds of mischievous primates, well-balanced birds and furry, purring predators.

In its infancy, the Dallas Arts Association (DAA), founded in 1903, held exhibitions at a variety of locations: the public library, a theater, the state fairgrounds and the ninth floor of the Dallas Power and Light Co. building. Today, the 370,000-square-foot Dallas Museum of Art designed by Modernist Edward Larrabee Barnes houses the city's impressive art collection, which encompasses works by such masters as Henri Matisse, Georgia O'Keeffe and Auguste Rodin. The centerpiece of the Downtown Dallas Arts District, this AAA GEM attraction ranks among the nation's leading cultural institutions.

A trip to Mexico led to the birth of the Nasher Sculpture Center; there, a Dallas entrepreneur and his wife purchased the first pieces in what would become a substantial private art collection. Since 2003, the couple's assemblage of modern and contemporary sculptures has been on public display in a striking Renzo Piano-designed edifice integral to the city's arts district.

Fair Park has seen its fair share of cleats, boots and ballet slippers. Year-round, athletes, cowpokes and dancers entertain enthralled spectators at the complex's sports and performance venues. Also a showplace for Art Deco architecture, the 277-acre AAA GEM attraction boasts one of the state's best representations of 1930s style: the Hall of State. The dramatic building crafted from Texas limestone for the Texas Centennial Exposition portrays Texan heroes, industries and activities both inside and out.

With the arrival of the State Fair of Texas in late September, Fair Park puts the spotlight on all things fried. Past winners of a caloric food contest among the fair's concessionaires have included deep-fried butter, fried chocolate and fried Coke. After you and the little ones are thoroughly covered in powdered sugar and the like, tear through Fair Park's kid-friendly educational attraction including a heavenly butterfly hangout ( Texas Discovery Gardens at Fair Park ). Plus, we reckon your group's pint-size sightseers will find the swimmingly fun Children's Aquarium at Fair Park anything but watered-down.

While you're in Irving, check out Robert Glen's magnificent Williams Square creation, The Mustangs of Las Colinas, which represents Texas' free spirit. Documenting the lifelike equestrian piece, The Mustangs of Las Colinas Museum features a 20-minute video about the carving as well as other works by Glen, a Kenya-born artist also known for his depictions of African wildlife.

Arlington, about 23 miles west of downtown Dallas, is home to two Texas-sized attractions. At state-of-the-art AT&T Stadium, diehard “America's Team” fans reminisce about the victories of Tom Landry (head coach 1960-88), Troy Aikman (quarterback 1989-2000) and Emmitt Smith (running back 1990-2002) during in-depth tours of the Cowboys' new 3 million-square-foot venue. Brawny spandexed gods—from Batman and Robin to The Flash—also reign at AAA GEM attraction Six Flags Over Texas, where the adventurous zoom “faster than a speeding bullet” on superhero-themed roller coasters and other pulse-racing thrill rides.

See all the AAA recommended attractions for this destination. / 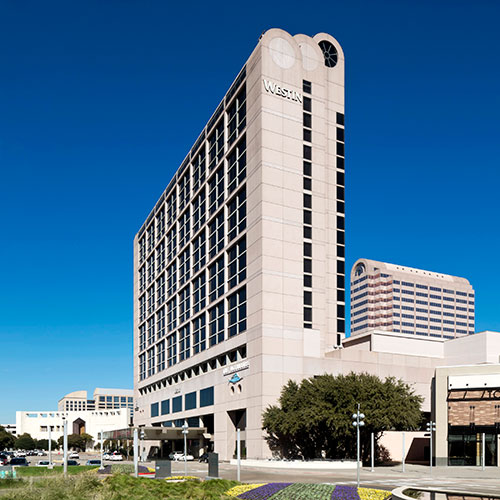