Denali, “the high one” in the Athabascan Indian language, was known for a time as Mount McKinley. It has two peaks: South Peak, the true summit, and 2 miles away, 19,470-foot North Peak. Most of the mountain is covered by ice and snow all year. Excellent views of the mountain are possible along the park road (weather permitting); clouds hide the summit about 75 percent of the time in summer and 60 percent the rest of the year.

The park's many glaciers originate on the slopes of the Alaska Range. Muldrow Glacier, the largest northward-flowing glacier in Alaska, stretches from between Denali's twin peaks to within a few miles of the park road; it can be seen from several vantage points.

More than 167 species of birds and 39 kinds of mammals inhabit the park; grizzly bears, moose, Dall sheep, wolves and caribous are some of the larger mammals. Equally varied is the vegetation. The chief conifers are black and white spruce, while dwarf birch grow in thickets on the lower slopes and along the intermountain valleys. Low, boggy meadows are the habitat of stunted, twisted black spruce.

Above the river valleys, forests give way to vast stretches of wet tundra supporting shrubby plants and often underlain by permafrost. Dry alpine tundra blankets the slopes and ridges at the higher elevations.

General InformationFrom Anchorage and Fairbanks, the George Parks Highway (SR 3) provides access to the park all year, and SR 8 from Paxson is usually open from early June to mid-October. The park also is accessible from Anchorage or Fairbanks via the Alaska Railroad; there is daily service from late May to mid-September. Trains run northbound to Fairbanks on Saturday and southbound to Anchorage on Sunday the rest of the year. Charter flights are available from principal airports. Visitors often stay in the year-round community of Healy, which is 11 miles from the park entrance.

Denali Park Road, beginning at SR 3 at the park's eastern boundary, runs about 90 miles westward through the park, terminating at a partly abandoned mining town, Kantishna. Only the first 14.8 miles to Savage River are paved, and most of the road is narrow with many sharp curves. It is usually open from early June to mid-September. The George Parks Highway (SR 3) runs along the eastern border of the park and offers sweeping views of the park's alpine scenery from Willow to Nenana.

Private vehicles may be used only on the first 14.8 miles of Denali Park Road unless you have a registered campsite at Teklanika River Campground. Transportation beyond Savage River or to Sanctuary Creek, Igloo Creek and Wonder Lake campgrounds is provided by shuttle buses that operate to Toklat, Wonder Lake and other points in the park.

More than half of the shuttle seats can be reserved by telephone and Internet; phone (907) 272-7275 or (800) 622-7275 in advance. The rest of the spaces can be reserved only in person within 2 days of departure; phone (907) 683-9274 for more information. Buses depart approximately every half-hour beginning at 5:15 a.m. from the Wilderness Access Center near the entrance at Milepost 0.5 on Denali Park Road. The bus stops to view wildlife when conditions are safe. Shuttle buses also drop off and pick up passengers along the park road on a space-available basis. The center houses a small theater.

The Murie Science and Learning Center, at Milepost 1.4 on Denali Park Road, is dedicated to research and education about America's eight northernmost national parks and offers field seminars and educational programs. It is open daily 9:30-5; closed major winter holidays. Phone (907) 683-6432.

To camp outside the established campgrounds, stop at the Wilderness Access Center for a backcountry permit. Reservations for all campgrounds may be made here.

Sled dog demonstrations are given by rangers at the park kennels, Milepost 3 on Denali Park Road. The 30-minute presentations are offered daily at 10, 2 and 4, June through August; phone ahead for availability. Ranger-naturalists also present various lectures, hikes and other activities daily at various campgrounds. Information about activities is available at the park Visitor Center and ranger stations, or pick up a copy of the park's informational newspaper, Denali Alpenglow.

Guided and self-guiding hikes are available along several nature trails with trailheads along the paved portion of the park road. Throughout the rest of the park, hiking is generally cross-country. The Spruce Forest Trail loop takes about 15 minutes, while the Morino Trail takes 30 minutes to complete. Backcountry permits are available from the Backcountry Information Center, adjacent to the Wilderness Access Center. The park offers several ranger-guided hikes. The hikes are free; however, hikers must purchase shuttle bus tickets to reach the various trails that do not originate at the Denali Visitor Center.

Do not feed or disturb wildlife. Grizzly bears in particular can be dangerous; inquire at the Visitor Center about how to avoid close encounters with grizzlies. Firearms must be declared and made inoperative when you enter the park; hunting and shooting are forbidden.

Temperatures during the park season can vary from 40 to 80 degrees Fahrenheit, with an average of 50 to 54 degrees June through August. Daylight generally lasts for more than 18 hours during the summer months.

Morino Grill, a cafeteria-style restaurant, is next to the Denali Visitor Center. A store near the park entrance contains supplies, but no gas is available; the store is open approximately 7 a.m.-9 p.m. during peak season, shorter hours at other times. A gas station north of the park entrance on George Parks Highway (SR 3) is open in the summer. Food and supplies also are available at Riley Creek Campground just inside the park boundaries.

PETSPETS are permitted in the park only if they are leashed or otherwise physically restrained; they are not allowed on trails, shuttle buses or in the backcountry. 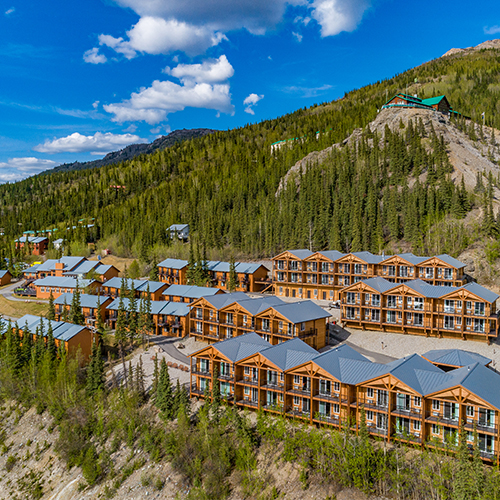