In addition, you’ll find something special going on in this edgy small town every month—from arts and crafts exhibitions to ethnic fairs. Dunedin, a name closely resembling the Gaelic word from which Edinburgh is derived, celebrates its Scottish heritage with the Dunedin Highland Games and Festival in late March or early April, the Military Tattoo in early April, and the Celtic Music and Craft Beer Festival in mid-November. Other calendar highlights include the Art Harvest, a juried art show held the first weekend in November at Highlander Park , and Mardi Gras Celebration, featuring an outrageous Main Street parade in mid-February.

Along with window shoppers, twilight partyers and spirited festivalgoers, bicyclists, joggers and inline skaters wind through the downtown area on a portion of the Pinellas Trail, a 34-mile-long corridor spanning from Tarpon Springs to St. Petersburg. North of downtown at 1050 Palm Blvd., golfers work on lowering their handicap at the Dunedin Golf Club, home of the PGA 1945-62; phone (727) 733-2134. Meanwhile, from early March to early April droves of sports fanatics assemble just south of downtown at Florida Auto Exchange Stadium, 373 Douglas Ave., (727) 733-9302, to watch the Toronto Blue Jays baseball club during spring training. Throughout the summer, the Class A Florida State League Dunedin Blue Jays dazzle spectators.

Subtropical surroundings and miles of striking shoreline also bring day trippers to Dunedin, which originated as a seaport and trading center in the 1800s. Between the mainland and the islands outdoor enthusiasts can windsurf, sail catamarans and ride personal watercraft on the protected St. Joseph Sound. If you’re a boater, cruise into the city marina, on the Intracoastal Waterway between the Dunedin and Clearwater causeways, then disembark for a stroll along the palm tree- and bench-studded linear park curving beside the water’s edge on Edgewater Drive (US 19A).

Or, navigate your vessel to the 108-slip marina at Dunedin’s most revered coastal attraction: Caladesi Island State Park. Pint-size shell collectors happily lug burgeoning collections of delicate sand dollars, freckled conchs and porcelain cowries along Caladesi’s secluded 3-mile beach—often regarded as one of the nation’s best—as playful couples splash about the turquoise-tinted surf. Traverse a 3-mile kayak trail shaded by sinuous mangrove trees during your visit, or look for signs of gopher tortoises, armadillos and raccoons on a hike through pine forests and coastal strand and maritime hammock communities.

Passenger ferries to the barrier island also are available and depart daily beginning at 10 a.m. from Honeymoon Island State Park, at the west end of the Dunedin Causeway (SR 586); phone (727) 734-5263 for ferry information. Both state parks offer opportunities for bird-watching (observe such endangered species as egrets, herons, ospreys and storks), swimming (plunge into warm waters averaging 75 F) and fishing (cast your line for everything from redfish to sheepshead).

ShoppingBefore hitting the antique shops and chic boutiques lining the streets of downtown Dunedin—a compact historic district radiating old Florida charm—fuel up with a wholesome breakfast shake from the Dunedin Downtown Market, held Friday and Saturday mornings from early November through May at Pioneer Park (420 Main St.). Scan the veggie- and fruit-laden tables at the farmers market, then join the packs of pedestrians pausing before well-designed storefront windows and tempting sidewalk cafés on Main Street. After lunch, sift through vintage treasures and coastal home accents on Broadway, or model crocheted silk shawls and handmade jewelry in the bungalows-turned-showrooms on Douglas Avenue. Throughout the year, bazaars and special events highlighting everything from arts and crafts to cherished collectibles boost Dunedin’s retail appeal.

For some unadulterated local flavor, walk to Dunedin Brewery, about 2 blocks north of Main Street at 937 Douglas Ave. Ask the barkeep about the unconventional people who inspired RazzBEERy Wheat Ale, or knock back a frosty mug of Apricot Peach Ale while planning your own fantastic shoreline-inspired saga; phone (727) 736-0606.

Whether you’re in the mood for gorgonzola-stuffed pork chops, a caramel appletini, or a few rounds of drag queen-hosted bingo, the Kelly’s suite of dining and entertainment establishments have you covered. Natives looking to see and be seen adore this artsy Main Street strip comprising a kitschy restaurant (Kelly’s, for Just About Anything!), a fabulously retro martini lounge (The Chic-a-Boom Room), and a dynamic nightclub and show bar (Blur). Kick back on the spacious patio—purring with a jumbled soundtrack of clinking glasses, candid chortles, and jazz and hip-hop beats—or wave your hands in the air like you just don’t care on the mirror-fronted dance floor. Show your face the next day (unless things got a bit too wild the night before), and Kelly’s friendly staff will nurse your hangover with fresh-squeezed OJ, mouthwatering flapjacks, and lots and lots of eye-opening coffee; phone (727) 736-0206 for The Chic-a-Boom Room and Blur or (727) 736-5284 for Kelly's. 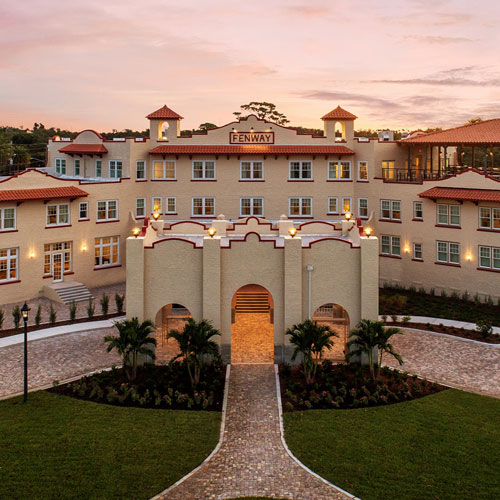