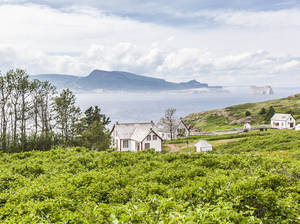 About GaspÉAt the eastern extremity of the Gaspé Peninsula, the town of Gaspé adjoins the mouth of the York River and overlooks an immense natural harbor. Explorer Jacques Cartier sailed into this bay in 1534 with two ships, and upon landing erected a cross claiming Canada for France. The word Gaspé is derived from the Mi'kmaq word gespeg, meaning “land's end.”

Commemorating the French explorer's landing is the Jacques Cartier Monument, 2 kilometres (1.2 mi.) north on Hwy. 132, across from The Museum of Gaspésie. Six slabs shaped like dolmens recall Cartier's Breton heritage and depict the events of his landing; phone (418) 368-1534.

Gaspé lies along the scenic portion of Hwy. 132, which follows the tip of the Gaspé Peninsula from Ste-Anne-des-Monts on the northern coast to Grand-Rivière on the southern coast.

The Museum of Gaspésie