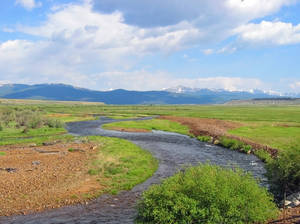 About GoldenGolden was settled in 1859 among the glacial deposits on Clear Creek. Its name recalls an early miner and the local preoccupation with gold prospecting. Golden rivaled Denver in importance for several years. From 1862 to 1867 it served as capital of the Colorado Territory.

The Colorado School of Mines, founded in 1874, is among the oldest institutions devoted to mineral sciences and engineering. The school enrolls more than 4,600 students; phone (303) 273-3226. The National Earthquake Information Center is on the campus at 1711 Illinois St.; guided tours of this facility are available by appointment Mon. and Thurs.; phone (303) 273-8420.

The Lariat Trail, the first 7 miles of The Lariat Loop National Scenic Byway, begins at US 6 and 19th Street and winds into the Denver Mountain Parks, ending near the Buffalo Bill Museum and Grave and Lookout Mountain Park.

Red Rocks Park and Amphitheatre, south of Golden, and Hogback Park, off I-70 near the US 40 exit, contain interesting geological formations. Golden Gate Canyon State Park and White Ranch Park, 9 miles northwest of Golden, offer recreational facilities. Golden celebrates the spirit of the Old West with Buffalo Bill Days on the last weekend in July; highlights include a parade, bands and crafts.

Self-guiding ToursLiterature outlining a self-guiding Public Art Walk tour is available from the chamber of commerce.