In DepthIf you look at a map of Virginia, you won't find a destination called Hampton Roads. Rather the term refers both to the channel through which the James, Elizabeth and Nansemond rivers flow into Chesapeake Bay (and ultimately the Atlantic Ocean) and the Norfolk-Virginia Beach metropolitan area.

On the “South Side” of the harbor are the cities of Virginia Beach, Norfolk, Chesapeake, Portsmouth and Suffolk, while the communities of Newport News and Hampton are on the northern “Peninsula.” The solution to the challenge of how to best get from one side of the harbor to the other was the creation of the Hampton Roads Bridge-Tunnel, the world's first bridge-tunnel combination, and, later, the Monitor-Merrimac Memorial Bridge-Tunnel. Regardless, traffic backups on summer weekends are common.

So where does this unusual name come from? The most accepted answer is that the Hampton part comes from an English nobleman, the third Earl of Southampton, who was a member of the Virginia Company of London. And Roads refers to the nautical definition of the word, wherein a “road” is a place of deep water where ships can safely anchor.

And ships have been anchoring in these waters for more than 400 years. In fact, the Susan Constant, the Godspeed and the Discovery landed at Cape Henry (the present site of Virginia Beach) in 1607 before heading up the James River and establishing the first permanent English colony in America at Jamestown. This trip has come to be known as the “First Landing.”

Fast forward a couple of centuries to one of the Civil War's key events—the naval engagement between the CSS Virginia (Merrimac) and the USS Monitor. This first duel between ironclad warships took place in the Hampton Roads harbor, in the waters just off Hampton and Newport News.

It's not surprising then, since Norfolk is blessed with one of the world's finest natural, year-round ice-free harbors, that it also has the world's largest Navy base, home to aircraft carriers, destroyers, frigates, nuclear submarines and amphibious assault ships. In addition to its formidable military presence, shipbuilding, ship repair and the transfer and storage of cargo also are major components of the area's economic base.

Downtown on the waterfront, not far from the Waterside District, is another reminder of the city's naval connection and offer fun things to do with kids. It's hard to miss Nauticus, Norfolk's waterfront maritime museum; the huge building is painted battleship gray and actually resembles a battleship. And, oh yes, The Battleship Wisconsin is docked next to it. The Hampton Roads Naval Museum is on the second floor.

Next to Nauticus is the Half Moone Cruise and Celebration Center where megaships sail off to the Caribbean and Bermuda.

Across the Elizabeth River from Norfolk is the city of Portsmouth. Searching for fun things for couples to do? A brief ride on a paddlewheel ferry deposits you right at Portsmouth's Olde Towne Historic District, where you can stroll past centuries-old architectural jewels in a charming residential area.

Hampton Roads' largest city is Virginia Beach, a favorite with vacationers in search of sun, sand, surf and seafood. What more could you expect from an oceanfront destination? How about wide beaches, warm breezes and a 3-mile-long boardwalk that can be traversed via pedal-powered surreys with fringe on top? A favorite photo op along the boardwalk is the 34-foot-tall statue of King Neptune, who seems to be rising from the sea, surrounded by sea life, pointed trident in hand. Be aware, though: The rhythmic sound of the surf is occasionally interrupted by the roar of a Navy jet soaring overhead.

If you prefer being on the water instead of in it, charter boats will take you to just the right spot to hook a marlin, tuna, striped bass, sailfish or wahoo. Or if your idea of seafood comes served with melted butter or tartar sauce, nearby restaurants offer countless variations of crab, shrimp oyster and fresh-off-the-boat “catch of the day” dishes. 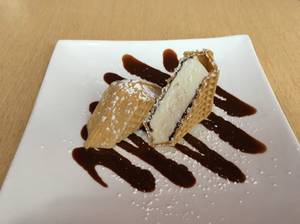