About HanoverIn its early days, Hanover was called Digg's Choice or Rogue's Roost, names that originated from the many outlaws who migrated to the area due to the lack of law enforcement that ensued after the Pennsylvania-Maryland boundary dispute. In 1763 Col. Richard McAllister founded the town by drawing up a formal plan; hence it was called McAllister's Town. In order to gain favor with Germans who occupied the land, McAllister named it Hanover, meaning “on the high banks.” The town was incorporated as a borough in 1815.

On June 30, 1863, the first Civil War battle north of the Mason-Dixon Line was fought in Hanover when Union generals Hugh Kilpatrick and George Custer defeated Confederate general J.E.B. Stuart and prevented him from reaching Gettysburg until the day after that major battle.

Hanover is the base for several industries that produce furniture, machine tools and such foods as potato chips and pretzels. The city's most famous product, however, is the horse. Just south on SR 194, Hanover Shoe Farms , is one of the largest Standardbred horse breeders in the world. The 4,000-acre farm, founded in 1926, is home to some 1,100 horses, many of which are record-breaking trotters and pacers. The grounds and buildings are open daily 8-4 for self-guiding tours; phone (717) 637-8931.

A variety of concerts and theater events are presented at the Eichelberger Performing Arts Center, 195 Stock St.; phone (717) 637-7086. Two miles east of town is Codorus State Park, which offers a 1,275-acre lake with 26 miles of shoreline. Swimming, boating, fishing, camping and picnicking are popular activities. Also in the area are nature trails and snowmobiling and sledding facilities.

Things to Do Basilica of the Sacred Heart of Jesus 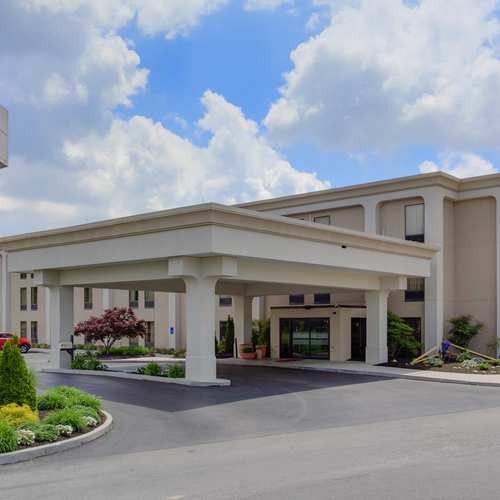