About Kailua-KonaOn the island's sunny leeward coast, Kailua-Kona has everything you'd expect to find in a tourist hub: restaurants, shops, tour operators and lodgings galore. At first glance, Kailua-Kona appears to be all souvenir hula dolls, condo complexes and expensive tropical cocktails, but this seaside town played an important role in Hawai‘i's past and offers some interesting historical sites as well.

About 15 minutes north of town, Kona International Airport receives daily flights from Honolulu and the mainland. Cruise ship passengers disembark at the town's convenient Kailua Pier. The downtown shopping/dining area has a couple of pay parking lots (rates are steep) as well as tough-to-find street parking (watch for posted time limits). Downtown is doable in a half-day. But if you're staying nearby, you'll undoubtedly return to dine at the restaurants.

The heart of town is a roughly .75-mile stretch of Ali‘i Drive, between the Kailua Bay seawall and the Coconut Grove Marketplace (at the intersection of Kahakai Road). A good place to start your downtown walkabout is the seaside Kona Inn Shopping Village (75-5744 Ali‘i Dr.), where you'll browse more than 50 specialty shops with items ranging from souvenirs and beachwear to jewelry and fine art.

Nearby are many more shops and open-air eateries, plus the historic Hulihe‘e Palace building and Moku‘aikaua Church . South on Ali‘i Drive, the shopping/dining area around the Coconut Grove Marketplace has a more modern look and feel. And on most nights you'll groove to live street musicians playing their hearts out for tips.

Note: As you motor along narrow Ali‘i Drive, be aware that mornings and afternoons are clogged with roadside joggers. Both pedestrians and motorists alike make all sorts of crazy, unpredictable maneuvers. In other words, pay attention.

Local beaches can't measure up to the idyllic strands along the Kohala Coast or some of the less popular but equally beautiful south island beaches. That said, Kailua-Kona's often-packed Kahalu‘u Beach Park boasts some of the best snorkeling on the island; scarce parking makes pre-noon arrival a necessity. When the surf's way up, La‘aloa Beach Park (aka Magic Sands Beach, White Sands Beach and Disappearing Sands Beach) draws daredevil surfers and bodyboarders.

In his old age, Kamehameha I spent much time in Kailua-Kona, a favorite spot of Hawaiian royalty. Ahu‘ena Heiau, near the Kailua Pier, was the seat of government in the early 19th century.

Nowadays, in many ways, this old town is the epitome of garish tourism. Condos on every corner. Chain restaurants transported from Middle America. And enough tacky, made-in-China knickknacks to make your head spin. Yet you can't help but fall a little bit in love with this Hawai‘i classic, despite the 21st century.

In March, craft beer enthusiasts flock to the Courtyard by Marriott King Kamehameha's Kona Beach Hotel for the Kona Brewers Festival. This celebration of suds also features food vendors and live entertainment. The Ironman World Championship, held annually in October, consists of a 2.4-mile ocean swim, a 112-mile bicycle race and a 26.2-mile run. The swim event begins and ends at the Kailua Pier, the bicycle route goes along the Kona coast, and the marathon uses part of the same highway as the bicycle race and concludes on Ali‘i Drive in Kailua-Kona.

Things to Do Ahu‘ena Heiau

Voyagers of the Pacific 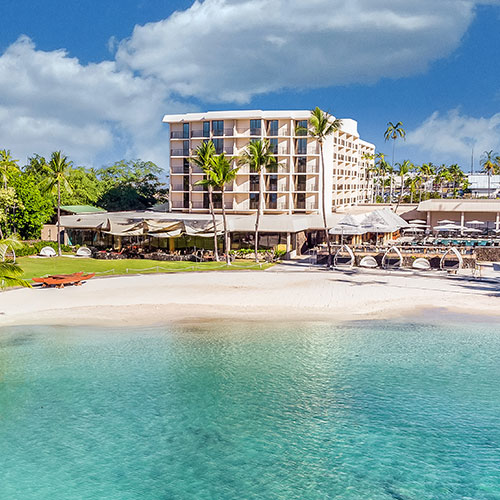 AAA Rate from
Book Now
Aston Kona by the Sea