About Lake Havasu CityLake Havasu City takes its name from the lake by which it lies. (Havasu is a Mohave Indian word meaning “blue-green water.”) Formed by the impoundment of Parker Dam in 1938, Lake Havasu is fed by the Colorado River. The 45-mile-long lake has a maximum width of 3 miles and supplies water to Arizona, Los Angeles and intermediate cities.

In 1963 industrialist Robert P. McCulloch Sr. purchased a 3,500-acre former Army Air Corps landing strip and rest camp on Pittsburg Point, a peninsula jutting into the Colorado River. After expanding the area by another 13,000 acres, McCulloch teamed up with Disneyland developer C.V. Wood to create a planned community and tourist destination.

The new town captured the world's attention in 1968 when McCulloch bought the London Bridge . Originally built in 1831 by architect John Rennie, the multi-arch bridge resided over the Thames River until 1968, when it began to sink into the river. Dismantled stone by stone, the bridge was brought over from London and reconstructed on Pittsburg Point. A man-made canal (known today as Bridgewater Channel) was dug underneath, separating Pittsburg Point from the land and forming an island.

Just over the bridge and along the island side of Bridgewater Channel, London Bridge Beach (1340 McCulloch Blvd.) has basketball and sand volleyball courts, playgrounds, picnicking facilities and a dog park. On the opposite side of the channel, Rotary Community Park (1400 S. Smoketree Ave.) features volleyball and bocce courts, a skate park, playgrounds, picnicking facilities, a buoyed swimming area and a shaded walkway.

Lake Havasu provides a setting for all types of water-related activities. Fishing is excellent, especially for striped and large-mouth bass, catfish and panfish; several public fishing docks and piers are available. Numerous companies rent canoes, kayaks, houseboats, pontoon boats, sailboats and other watercraft for use on the lake; contact the convention and visitors bureau for more information.

Believe it or not, lighthouses exist in landlocked Arizona. Twenty-four functioning one-third-scale replicas of famous U.S. lighthouses stand along the shoreline of Lake Havasu, providing navigational aid and a conversation piece.

On the last day in November and the first day in December a fleet of illuminated boats on the lake makes the Boat Parade of Lights a dazzling sight spectators won't soon forget. 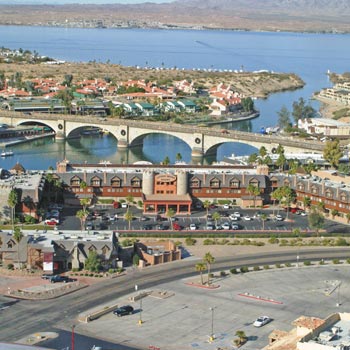