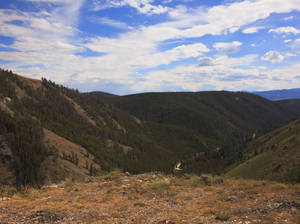 About LaramieAlthough Native Americans roamed the Laramie Plains as early as 8000 B.C., Laramie's recorded history began in the early 19th century with the arrival of the area's first white man, Jacques LaRamie, a trapper for American Fur Co. In his steps followed mountain men, trappers, emigrants, soldiers and explorers, many tracing the old Cherokee Trail.

Fort Sanders, a short distance south, provided protection for the Overland Stage Line and for the Union Pacific. The railroad brought the bulk of Laramie's citizenry—including a sizable population of lawless riffraff who finally left town at the prompting of self-appointed vigilance committees. The first woman juror, Eliza Stewart, served in Laramie in March 1870. In the fall “Grandma” Louisa Swain became the first woman to vote in a general election.

Recreational opportunities abound nearby. Cross-country skiing is available east of Laramie, and downhill skiing and snowmobiling can be found in the Snowy Range of the Medicine Bow Mountains, west of the city on SR 130. Both regions are equally attractive to vacationers during the summer, with many camping and picnic areas.

Of geological interest is Sand Creek, a 6,000-acre natural landmark about 20 miles southwest of Laramie. Some of North America's finest examples of cross-bedded sandstone and “topple blocks” can be seen.

Laramie serves as the eastern end of a scenic portion of I-80, which runs 99 miles northwest to Walcott. Snowy Range Scenic Byway (SR 130), off the I-80 Snowy Range exit, offers a view of mountains, lakes and forests. At the summit, the Libby Flats Observatory and a viewing platform offer a panorama of the area.