About LunenburgOnce the site of an Indian encampment and later a French fishing harbor, the Lunenburg area was granted by Oliver Cromwell to Charles de La Tour in 1656. Families from Hanover as well as French, German and Swiss immigrants, founded the town and cleared farmland 1751-53.

Old Town Lunenburg—now a UNESCO World Heritage Site—has been called “the best surviving example of a planned British colonial settlement in North America.” On the spit of land between front and back bays, the town was laid out in a rectangular grid with narrow streets and garden plots.

Among Old Town's many preserved 18th-century buildings are some of the earliest churches in Canada. St. John's Church, established in 1754 by royal charter, ministered to the Hanoverians, Indians, French and English. The 1776 Zion Evangelical Lutheran Church holds the St. Antoine Marie bell from Louisbourg. Also of historical interest is a monument that commemorates the sacking of the town on July 1, 1782, when a fleet from Boston plundered stores, shops and houses.

Lunenburg is said to be one of the greatest fishing ports on the continent and was home to the Bluenose, the undefeated champion of the North Atlantic fishing fleet and the winner of four international schooner races from 1921 to 1931; her likeness is on the Canadian dime. The Bluenose II, a replica schooner docked off Bluenose Dr., can be toured during the summer.

Tours of Lunenburg's harbor depart from the wharf behind the dory shop. Summer deep-sea fishing, whale-watching and lobster cruises depart daily from the Fisheries Museum of the Atlantic; reservations are advised.

A few kilometres south of Hwy. 3 is the village of Blue Rocks, named for the bluish hue of the surrounding rocks and ledges.

Historic Lunenburg is the backdrop for the Lunenburg Folk Harbour Festival in early August, which features music from top-notch performers.

Things to Do Fisheries Museum of the Atlantic 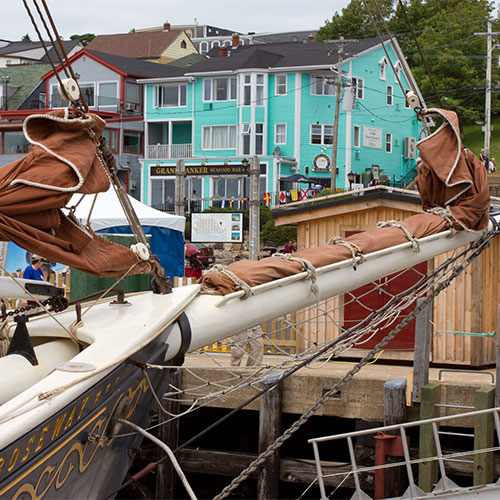 AAA Rate from
The Rumrunner Inn

AAA Rate from
The Lunenburg Inn