Mexico City Sports & RecreationIn addition to the spectator sports mentioned below, Mexico City offers basketball games, boxing matches and a growing collegiate schedule of American-style football that may coincide with your vacation. Your hotel concierge can help you get tickets.

The best bullfighting in the republic can be found at Plaza de Toros México (M: San Antonio, line 7). Accommodating about 50,000 spectators—one of the world's largest bullrings—it is on Calle Augusto Rodín, a few blocks west of Avenida Insurgentes Sur and adjacent to the Estado Azul football stadium. The location is about 6 kilometers (4 miles) south of the traffic circle at Paseo de la Reforma (the Cuauhtémoc Monument).

The season for top matadors runs from early November through March. During other months novice bullfighters (novilleros) take the ring. Bullfights start promptly at 4:30 p.m. on Sunday; buses marked “Plaza México” travel along Insurgentes Sur throughout the afternoon. Plan on arriving early to get a good seat, and hang on to your ticket stub so you can reclaim your seat if you need to leave it.

To avoid long lines at the bullring's ticket windows (taquillas), buy tickets in advance through Ticketmaster (ticketmaster.com.mx), or book a bullfight excursion through your hotel or a travel agency. Ticket prices range from about $8 to $60 (U.S.); they vary according to proximity to the ring and the side on which you sit. Sun (sol) is cheap, shade (sombra) is expensive. Seats in the sun tend to attract the more unruly fans. Note: The bull is traditionally killed during these performances; don't plan on attending if you find the spectacle's inherent cruelty upsetting.

Soccer (fútbol) is played almost every weekend by the big leagues at Azteca Stadium, in the southern part of the city on Calzada de Tlalpan, north of the Periférico Sur. Shuttles are available from the Taxqueña Metro station (line 2). There are winter (August to December) and summer (January to May) seasons. The city's most popular team, América—nicknamed Las Aguilas (the Eagles)—draws huge crowds, especially when they play arch-rival Guadalajara in a match called El Clásico.

The National University of Mexico-sponsored Pumas play soccer at Olympic Stadium (Estadio Olímpica) on the National University of Mexico campus. The oval design somewhat resembles the crater of a volcano. A Diego Rivera mosaic of colored rocks, illustrating human endeavor in sports, covers the stadium's sloping walls. Tickets for all games are normally available right up to game time and range from about $10 to $20 (U.S.).

Almost as popular as soccer is wrestling. Mexico's version of professional wrestling is called lucha libre (literally “freestyle wrestling”), and it's a flamboyant spectacle indeed, with in-the-ring theatrics on par with those served up by the WWE in the states. In addition to spandex tights, luchadores wear colorful masks, and the wrestlers keep them on even when out in public, thereby masking their identities. You'll see lucha libre masks for sale at practically every souvenir stand in the country.

Typical matches pit técnicos (good guys) against rudos (bad guys) in a flurry of flying dropkicks and other spectacular maneuvers. There are also female wrestlers (luchadoras) and short-statured competitors (los minis). And just like north of the border, the personas, feuds and over-the-top stunts are all meticulously choreographed, although the athletic ability on display is quite evident.

The best place to enjoy an evening of lucha libre is Arena México, Calle Dr. Lavista #189, Colonia Doctores (M: Cuauhtémoc, line 1), about nine blocks southwest of Alameda Park. The arena is a bit run-down, but that's all part of the fun. Vendors sell beer and wildly enthusiastic fans cheer on their favorites. Ringside seats cost more, but you'll be at the center of the action. Tickets can be purchased at the door or in advance through Ticketmaster; phone (55) 5325-9000. Matches featuring big names sell out quickly. Note: The neighborhood is on the sketchy side, so don't bring any valuables or hang around the arena afterward.

Teams in the Mexican League play baseball from the beginning of April through mid-September. Games are announced in Spanish, but little is lost in the translation as the rules are the same. Some key terms: el lanzador is the pitcher, la entrada is the inning, pegar means hit, un sencillo is a single.

The Diablos Rojos del México (Mexico City Red Devils) play at Estadio Alfredo Harp Helú, in the eastern part of the city, adjacent to the Formula One auto racing complex. The season runs from April through mid-August. General admission seats are inexpensive, less than $5 (U.S.). Tickets can be purchased through Ticketmaster.

Horse races are held at the lovely Hippodrome of the Americas (Hipódromo de las Américas). The track is in the northwestern part of the city between avenidas del Conscripto and Industria Militar, just west of Boulevard Manuel Avila Camacho. Races are held Friday through Sunday throughout the year; first post times are 2 p.m. on Friday and Saturday and 1 p.m. on Sunday.

Tennis and golf clubs are typically for members only. If your heart's set on playing tennis, it's best to stay at a hotel that offers courts. The Bella Vista Golf Club (Club de Golf Bellavista) is northwest of the city off Av. de los Arcos. to Av. Valle Verde #52. In addition to an 18-hole course, the club offers rental carts, caddies, a pro shop and a clubhouse. Greens fees range from around $65 on weekdays to $125 on weekends. For additional information or to make a reservation for a tee time, phone (55) 5366-8050. 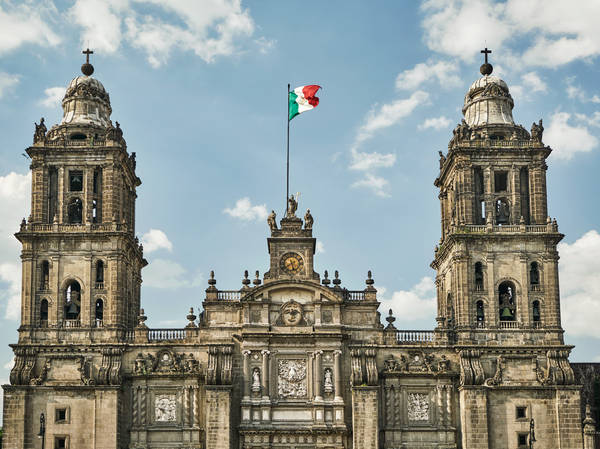