More About
Monterey Peninsula, CA
HotelsAttractionsRestaurantsCampgrounds
IntroductionIn DepthWhat to Do in MontereyOne Day in MontereyBest Restaurants in MontereyBest Attractions in MontereyMonterey in 3 DaysMonterey EventsA Coastal Slice of Heaven7 Luxury Hotels for Your Big Sur Road TripInspector Picks: Five of the Most Romantic West Coast Hotels

Best Attractions in MontereyIn an area with dozens of attractions, you may have trouble deciding where to spend your time. Here are the highlights for this destination, as chosen by AAA editors. GEMs are “Great Experiences for Members.”

The Monterey Peninsula boasts some of the nation's most gorgeous scenery, and several area attractions allow you to observe the area's dramatic landscapes and sea vistas. Take the guided trek offered by Carmel Walks to weave through the enchanting town's hidden passageways and charming courtyards—you'll also see vibrant gardens and lavish homes of the rich and famous. If you're looking for fun things to do, Pebble Beach's 17-Mile Drive , a AAA GEM attraction, beckons those in search of staggering beauty. You'll catch glimpses of magnificent estates tucked amid serene forestland. The habitat changes as the route travels past craggy seascapes sprinkled with wildflowers, where harbor seals and sea otters romp among the rocks.

Tor House , former home of poet Robinson Jeffers, is a great vantage point from which to watch the ocean crash mercilessly into gigantic boulders. For some added inspiration, climb the tower that Jeffers built one rock at a time—your reward is a sweeping view of the coastline off Carmel-by-the-Sea . Head to Pacific Grove's Point Pinos Lighthouse , reputedly the West Coast's oldest continuously functioning structure of its kind—its shining beacon has guided ships through California's rocky waters since 1855. Spanish explorer Sebastián Vizcaíno dubbed this densely wooded tip of the peninsula Punta de los Pinos—or “End of the Pines”—when he sailed by in 1602.

Point Lobos State Natural Reserve , a AAA GEM attraction, is home to some 250 animal and bird species, plus more than 350 types of plants. This protected sliver of rugged seacoast is laced with hiking trails that lead to breathtaking views of the ocean. Sea lions are more often heard than seen; upon hearing their distinctive bark, Spanish explorers named this site Punta de los Lobos Marinos, or “Point of the Sea Wolves.”

The Monterey Bay Aquarium , a AAA GEM attraction, overlooks the water from its perch on historic Cannery Row. You can see everything from fierce sharks and giant octopuses to sea dragons and monkey-face eels. Fun things to do include watching the twice-daily penguin feeding or attending one of the sea otter training sessions. The aquarium's vast array of exhibits entertains the family for hours. Monterey Bay Whale Watch has a high success rate for whale sightings, which may include humpback, killer, gray or blue varieties. Passengers are often surprised at the beauty and grace with which these massive mammals perform their aerial acrobatics. Marine biologists provide detailed information about sea life encountered during the trip.

For some stimulating indoor activity, visit one of the area's fine museums. The Pacific Grove Museum of Natural History interprets the peninsula's plant and animal life. Wander through a garden adorned with native flora and seasonal wildflowers, or peruse displays of mounted Monterey County birds, monarch butterflies, marine mammals, insects and Native American artifacts. Kids love to peek at the orca skeleton and play in the touch gallery.

Mission San Carlos Borromeo del Rio Carmelo , a AAA GEM attraction, contains several small museums within its adobe walls—for an overview of the compound's history, stop by the Sir Harry Downie Museum. The Munras Memorial Museum displays furnishings, household articles and a Victorian marble mantle, while the Mora Chapel features religious exhibits and the tomb of the Carmel mission's founder, Father Junípero Serra. You also can explore the convent museum, basilica and shrine, or simply meander through the lovely grounds.

History buffs should plan to spend some time at the 7-acre Monterey State Historic Park , a AAA GEM attraction preserving a collection of heritage sites and one of the area’s most fun things to see. (Many are open for seasonal guided tours; contact the park office for details.) Whalebones and wine bottles frame the path at Casa Soberanes and Garden , an 1840s home created from sun-dried mud. A ship captain's wealth is evident at Cooper-Molera Adobe and Garden , an elegant residence with a visitor center, barns, farm animals and period gardens. Custom House , considered California's oldest government building, was the site where customs agents levied taxes on all shipping imports coming into the Mexican territory.

Although the park has its share of adobe buildings, you'll also see the First Brick House , one of the state's earliest buildings fashioned from fired clay blocks—the main room contains exhibits about Monterey's history. In 1850, U.S. Army officials raised funds by producing plays at First Theatre and Garden. Both the First Brick House and the theater are currently closed, but the garden is worth a visit. Furnished with 19th-century antiques, the two-story adobe at Larkin House and Garden served as the prototype for the town's Colonial architecture. American merchant Thomas Oliver Larkin constructed the 1835 dwelling, while his granddaughter planted the lush garden.

To learn about Monterey's role as capital of Spanish California, investigate the interactive exhibits at the park's Pacific House Museum . Townspeople once held bull and bear fights in what is now the peaceful oasis of Memory Garden. A young Robert Louis Stevenson lived at the Stevenson House , where he wrote about Monterey in his memoir, “The Old Pacific Capital.” Several rooms of the former boarding house contain memorabilia devoted to the author.

The tidy Sherman Quarters—perhaps the park's most photographed adobe—was the 1847 home of Lt. William Tecumseh Sherman, who would make his name as a general during the Civil War. The Old Monterey Whaling Company began using The Old Whaling Station as its headquarters in 1855.You can spot the massive iron pots used to boil oil from blubber, and the front pathway is paved with whale vertebrae. There's a beautiful rose garden around back. 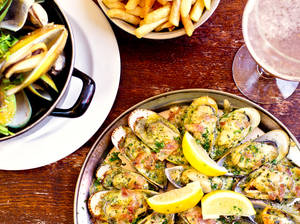