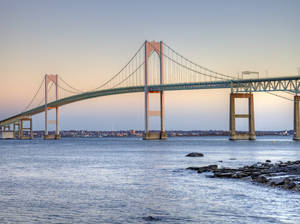 About NewportNamed after Admiral Christopher Newport, the commander of the first English settlement at Jamestown, Virginia, in 1603, Newport's location at the confluence of the Ohio and Licking rivers was a natural stopping point for pioneers heading west. Founded in 1795, Newport and its neighbor Cincinnati grew and prospered as a result of riverboat traffic along the Ohio.

The early 20th century, however, saw a change in the city's character. Coinciding with the invention of the Thompson machine gun (“Tommy Gun”) by Newport native John Thompson, the city became a haven for gangsters in the 1920s. Gambling halls, glitzy nightclubs and prostitution followed and earned Newport the nickname “Sin City” from the 1940s through the '80s.

Reform, coupled with renovation and redevelopment, has transformed the city. The East Row Historic District is graced with tree-lined streets and elegant 19th-century homes, and the riverfront has been revived with the addition of trendy shopping and entertainment areas and the Newport Aquarium.

The city's Levee District is home to the World Peace Bell, which was the world's largest free-swinging bell 2000-2016. One of 20 worldwide, the bell within the transparent Freedom Tower, 425 York St., commemorates the 50th anniversary of the 1948 Universal Declaration of Human Rights and rings each morning around noon and during special occasions. Guided tours are available for a fee Mon.-Fri. 10-4; phone (859) 655-7700. Also nearby are the Northern Kentucky Firefighters Memorial and a scaled version of the two World Trade Center towers, honoring Sept. 11, 2001, and the valor of firefighters.

ShoppingNewport on the Levee, 1 Levee Way on the banks of the Ohio River, is an entertainment district featuring shopping, dining and clubs.

Things to Do BB Riverboats

Aloft Newport on the Levee