The relentless forces that carved 7-mile-long Niagara Gorge and gave Niagara Falls its current photogenic shape are still at work today. For the most part change comes gradually—occurring over hundreds and thousands of years—but every now and then the process turns violent as undermined rock strata yield in a sudden, landscape-altering instant.

One storied Niagara attraction that fell victim to the ever-shifting rock was the Great Gorge Route, a round-trip electric trolley ride that descended into the gorge at Niagara Falls and followed the river just a few feet from the violently churning whirlpool rapids before emerging at Lewiston, N.Y., where it crossed the bridge into Ontario. From there the tracks ran along the cliff verge back to Niagara Falls.

The views from the open-air cars were spectacular, and the excitement generated by such a remarkable engineering feat made the route a tourist draw in itself. But rockslides plagued the tracks on the American side from the beginning, and as automobile travel grew in popularity, the Great Gorge Route became less and less profitable. Finally, when a particularly large avalanche destroyed the rail bed near the Whirlpool Bridge in 1935, the line ceased operations.

An even more destructive rockslide occurred in 1956 when the cliff wall behind the 19th-century Schoellkopf Power Station collapsed, taking most of the station with it. Amazingly, of the 40 men working in the building at the time, only one perished. Look closely at the area just north of the Rainbow Bridge's American end, and you can see vestiges of the station's 100-year-old brick walls.

Another rockslide made headlines 2 years earlier when tourists noticed a large crack in the Prospect Point observation area next to the American Falls. Within hours a huge section of the point—nearly 200,000 tons of rock—plummeted into the gorge. Engineers later blasted several more tons away to stabilize the area.

If you've ever taken the Cave of the Winds Tour and wondered, “What cave?” you're not alone. A natural cave behind the falls once existed, but instability forced its closure in 1920, and the 1954 Prospect Point rock fall and subsequent dynamiting removed its last traces. Likewise, the landmark stone ledge on the Canadian side known as Table Rock fell away in huge chunks throughout the 1800s, and in 1935 its remnants were deemed unsafe and sheered off with explosives.

After the dramatic 1954 avalanche changed the face of the American Falls, public fears that erosion would obliterate the falls entirely led the U.S. Army Corps of Engineers to undertake an extraordinary project: divert the Niagara River and shut the falls off. For several months in 1969, the American and Bridal Veil falls were temporarily “dewatered” as geologists studied the exposed riverbed to see how erosion could be minimized. Since then engineers have installed steel rods, cables and bolts to strengthen the rock and drilled holes to relieve water pressure. Instruments around Luna Island and Prospect and Terrapin points now measure rock movement to avoid further surprises.

And slowing erosion at the falls even more: the tremendous volume of water both Ontario and New York divert to produce electricity. During the summer tourist season, 50 percent of the river's flow bypasses the falls, and in winter that number increases to 75 percent. Before water was rerouted, the falls receded a few feet every year; now erosion is measured in inches.

At that rate, you'll be able to snap photos of Niagara Falls for another 50,000 years, give or take a millennium. 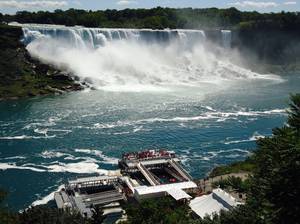 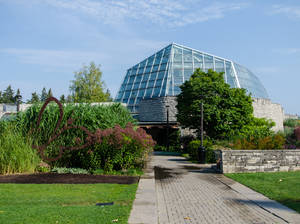