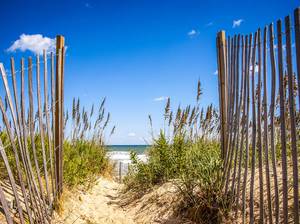 About OcracokeThe fishing village of Ocracoke (OHK-ruh-coke) is on Ocracoke Island, adjacent to Cape Hatteras National Seashore on the Outer Banks. Houses scattered willy-nilly along sandy streets overhung with yaupon and moss-festooned live oaks present a picturesque setting that is enhanced by the backdrop of Silver Lake. Completed in 1823, the 75-foot Ocracoke Lighthouse is thought to be the oldest continually operating lighthouse on the North Carolina coast.

Ocracoke also is known to have been a hangout of Edward Teach, alias Blackbeard; the notorious pirate and his crew were killed at Teach's Hole in 1718. Legend holds that Blackbeard still wanders the area in search of his severed head.

The British Cemetery is the resting place for four HMS Bedfordshire crew members who died in 1942 when their trawler was presumably torpedoed by German submarines. A public memorial service attended by members of the British Royal Navy and the U.S. Coast Guard honors these sailors—two of whom are unidentified—each May.

Bicycle rentals are available in town for those who seek a practical and enjoyable means of exploring the island. Bird-watchers will be able to spot many species, particularly during the spring and fall migratory seasons. At a 100-acre exhibit area 5 miles north of the village on scenic SR 12, visitors can observe wild Banker horses that have roamed the island for nearly 3 centuries. According to one tale, the ponies were abandoned by European explorers who sought to lessen the cargo load of ships that had run aground and wrecked.

The island is a hot spot for clamming, crabbing, fishing, kayaking, scuba diving, surfing, swimming and whale watching. From sunset cruises to fishing expeditions to tours of nearby Portsmouth Island, boating activities abound. Those who, like a high tide, can’t seem to pull themselves away from the shore might behold the marvelous sight of luminescent phosphorus in the nighttime surf.

Ocracoke Island is reached by a free ferry from Hatteras on SR 12 and by a toll ferry from Cedar Island and Swan Quarter. Reservations are necessary for the toll ferries and can be made up to 30 days prior to the departure date. Reserve in person at the terminal or phone (800) 293-3779. The Hatteras ferry does not accept reservations.