About OdessaIn 1881 Russian railroad laborers named Odessa after their homeland, which the wide, flat prairie resembled. By Texas standards, Odessa was a tame cow town, primarily because local Methodists outlawed saloons until 1898; the first bar was opened by the sheriff. The discovery of oil in 1926 brought prosperity and a population boom; by World War II, Odessa was one of the world's largest inland petroleum complexes.

After his graduation from Yale, George Herbert Walker Bush moved to Odessa in 1948 to work in the oil fields, bringing his wife and 2-year-old son George W. with him. The family lived in the Odessa-Midland area for 11 years.

The second largest known meteor crater in the United States is 8 miles west of the city, between I-20 and US 80. The world's largest known hare, the 8-foot Odessa Jackrabbit statue, is located at the corner of 8th and Sam Houston streets.

The Globe Theatre, 2308 Shakespeare Rd. on the Odessa College campus, is a replica of Shakespeare's original playhouse. Community and professional productions are staged in the theater; tours are offered by appointment for a fee. Phone (432) 335-6818.

The Odessa Meteor Crater and Museum

The Presidential Archives and Leadership Library 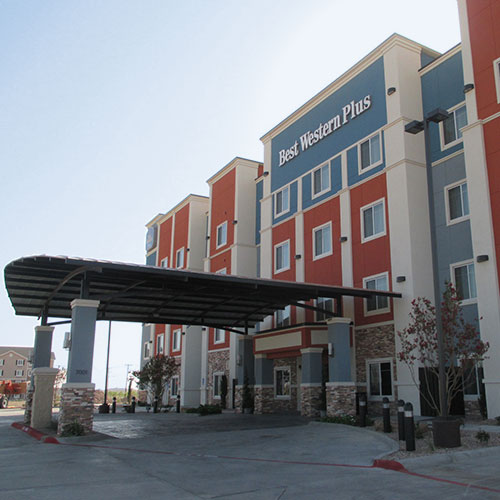