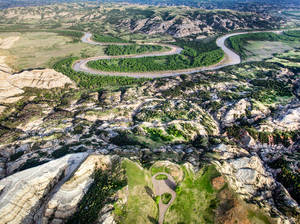 About OrangeThis small rural town in the state’s north-central region was named after Prince William of Orange, who married King George II’s oldest daughter in 1734, the year Orange County was founded. The town was home to Col. James Taylor II, great-grandfather to two American presidents, James Madison and Zachary Taylor.

During the Civil War Orange County was Confederate stomping ground. Robert E. Lee’s army camped there in the winter of 1863-64 and on the eve of the May 1864 Battle of the Wilderness, the opening conflict in Ulysses S. Grant’s bloody Overland Campaign. Lee regularly worshipped at St. Thomas’s Episcopal Church on Caroline Street; the locust tree to which he tied his horse, Traveller, is labeled.

As you’re exploring Orange, keep your eyes peeled for a series of markers that highlight other historically significant sites. Among these points of interest is the 1909-10 Colonial Revival-style Orange Train Station, 122 E. Main St. The original building and several nearby structures burned down in a 1908 fire that swept through the eastern part of town. The station ceased its passenger train operations along the Orange & Alexandria Railroad in the early 1970s; today it houses the Orange County Visitors Center.

If history isn’t your cup of tea (or glass of Chardonnay), visit a local winery—be sure to drink in the sensational views of rolling hills, spacious farmland and the Blue Ridge Mountains en route. For a shopping experience that won’t leave you empty-handed, check out the antiques shops and art galleries on Main Street.