best attractions in the outer banks

Best Attractions in the Outer BanksIn an area with dozens of attractions, you may have trouble deciding where to spend your time. Here are the highlights for this destination, as chosen by AAA editors. GEMs are “Great Experiences for Members.”

Let's start at the beginning. Roanoke Island, to be specific, is where the group of colonists sent by Sir Walter Raleigh landed in 1585 in an attempt to establish the first English-speaking settlement in the New World. The tiny island, surrounded by Roanoke and Croatan sounds just west of Nags Head , is the site of several attractions that examine this ill-fated venture and the settlers' mysterious disappearance.

The focal point of Fort Raleigh National Historic Site is a small earthen fortification, a reconstruction of the one built by those courageous colonists. The Lindsay Warren Visitor Center provides an introductory video and displays artifacts discovered during the site's excavation. A room taken from a 16th-century Elizabethan hall shows the aristocratic lifestyle the journey's benefactors were accustomed to.

Within the historic site are two AAA GEM attractions. The musical drama “The Lost Colony” has been presented outdoors in a waterfront theater at Fort Raleigh every year since 1937 (except during World War II). The play examines the unresolved fate of a second group of pioneers sent to Roanoke Island by Raleigh. When a supply ship reached the island from England bringing much-needed provisions, no trace of these colonists could be found. Included in this group, which has come to be known as the Lost Colony, was Virginia Dare, the first English child born in the New World. Nearby is Elizabethan Gardens , designed to resemble the formal gardens typical of 16th-century English estates. Created in memory of Raleigh's settlers, the grounds have walkways winding past colorful seasonal plantings—azaleas, dogwoods, magnolias, chrysanthemums and camellias; fountains; and statues, including one of Virginia Dare.

Things to See in the Outer Banks

In addition to a museum with interactive exhibits chronicling 400 years of Outer Banks history, the AAA GEM attraction Roanoke Island Festival Park, Home of Elizabeth II also features a living-history settlement where costumed interpreters portray the harsh everyday existence of those pioneers, and the Elizabeth II, a hand-hewn representation of the sailing ships common during that period. Elizabethan-clad guides welcome visitors on board the brightly painted vessel and provide insights into the realities of shipboard life during that late-16th-century voyage to the New World. A film presented from the viewpoint of the island's native inhabitants, boardwalks and an outdoor concert pavilion are part of the park as well.

Also close by is the North Carolina Aquarium on Roanoke Island , which spotlights the diverse waters of the Outer Banks; all aquatic residents are indigenous to the state. The feature exhibit boasts the state's largest aquarium, where sharks, sea turtles and other ocean life coexist with a replica of the Civil War ironclad USS Monitor. A walk through an atrium's marshy environment promises glimpses of lounging alligators and playful river otters, and touch tanks allow for close contact with sting rays and horseshoe crabs. Visitors who time their visit right can see presentations by scuba divers and daily feedings.

In the southern reaches of the Outer Banks on Hatteras Island is Frisco, where you'll find a tribute to North America's earliest citizens. The Frisco Native American Museum & Natural History Center has collections of artifacts representing Native American tribes from across the continent. Displays of basketry, jewelry, pottery and weapons help define the history and culture of these groups. Nature trails wind through several wooded acres.

Remote and undeveloped, Cape Lookout National Seashore extends 56 miles southward from Ocracoke Inlet along the North Carolina coast. You'll have to do some advance planning to visit the seashore's four sandy barrier islands, however, since they are reachable only by boat and have limited services. Nature lovers make the journey for the splendid bird-watching, photography and surf fishing opportunities, or just to collect seashells along the beach. A herd of free-roaming horses, legend says, has made its home on Shackleford Banks since the 1500s; if you happen to spot these elusive creatures, remember they are wild and not used to human contact. The lighthouse keeper's quarters serves as a visitor center for the national seashore.

Picking up where Cape Lookout National Seashore leaves off, the AAA GEM attraction Cape Hatteras National Seashore covers almost all of the Outer Banks' Ocracoke and Hatteras islands and part of Bodie Island. The nation's first national seashore, Cape Hatteras protects quiet expanses of beach that seem to stretch for miles, offering peaceful escapes where shorebirds flitting about in search of food frequently outnumber people. And, though sand dunes and sea oats are common images of the seashore, it also encompasses woodlands, marshes and sounds. Access points to the shore are frequent along SR 12, the main road through the Outer Banks.

Within Cape Hatteras National Seashore are two other points of interest. The Cape Hatteras Lighthouse, with its distinctive black-and-white diagonal stripes, is often considered a symbol of the Outer Banks. This sentinel has guided ships away from the treacherous Graveyard of the Atlantic, as these offshore waters are known, since 1870. The lighthouse was itself rescued from the encroaching surf in 1999 in a feat of engineering achievement and moved 1,600 feet further inland. The view from its observation deck is well worth the climb. At the northern end of Hatteras Island is Pea Island National Wildlife Refuge , which was initially created as a safe haven for migrating snow geese. The geese share their sanctuary with other seasonal residents such as swans, ducks, terns and herons as well as with sea turtles. Gaggles of bird-watchers and vacationers carrying binoculars and cameras take advantage of the observation platforms scattered throughout the refuge.

Fun Things to Do with Kids Around the Outer Banks

Two great places for kids—from both an educational and a letting-off-steam perspective—are the AAA GEM attraction Wright Brothers National Memorial and Jockey's Ridge State Park . Orville and Wilbur Wright, arguably the area's most famous visitors, chose the soft sand dunes, windy conditions and remoteness of the Kill Devil Hills area to test their gliders and, ultimately, attempt powered flight in their handcrafted flying machine. A granite monument attesting to the success of their efforts stands atop Big Kill Devil Hill near the actual site of their world-changing December 1903 flights. Two reconstructed sheds represent those the Wrights used as a hangar and combination living quarters and workshop; simple markers indicate the increasing distances flown on each of the four flights made on that momentous day. Exhibits in the visitor center and Centennial Pavilion, including reproductions of the brothers' glider and flyer, trace the history of aviation.

Instead of just imagining the Wright brothers' early gliding adventures, visitors can actually take to the sky themselves (after a little instruction) at Jockey's Ridge State Park. Lessons are available for those brave enough to try hang gliding from the highest sand dune on the East Coast. The state park is a favorite with children, who love to clamber to the top of the dune and then roll back down the sandy slope. The dune's summit also is a popular place for kite flying and watching brilliantly hued sunsets. Two hiking trails and a museum with natural history exhibits provide a close-up look at the park's ecology.

At the northernmost reaches of the Outer Banks in Corolla are two attractions that hearken back to an earlier era. The Whalehead in Historic Corolla , overlooking Currituck Sound, was built in 1925 as a winter retreat by a wealthy Northern couple who enjoyed waterfowl hunting along the Atlantic flyway. The restored Art Nouveau mansion retains its Tiffany chandeliers and many of its lavish details, such as cork floors and a copper roof. Nearby is the 1875 Currituck Beach Lighthouse , the last such tower built on the Outer Banks. Exhibits can be seen on the lower levels, and visitors who make the winding climb up the red brick lighthouse's 220 steps can appreciate expansive views of the Atlantic Ocean and Currituck Sound. 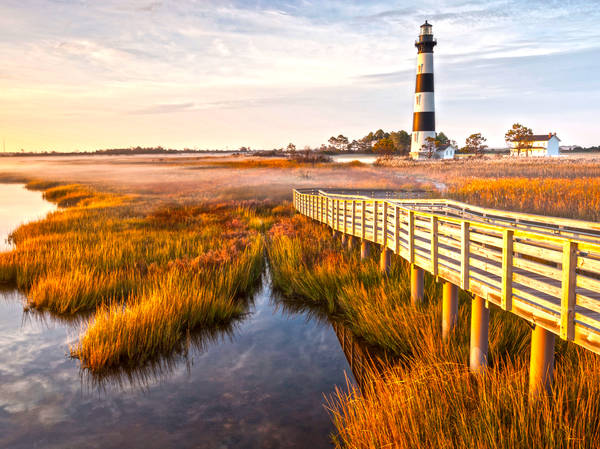 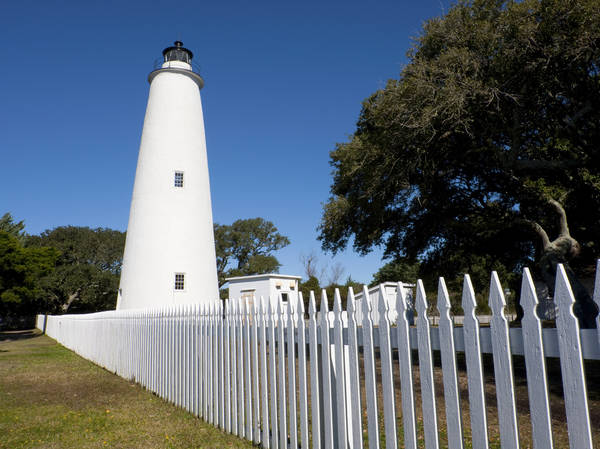 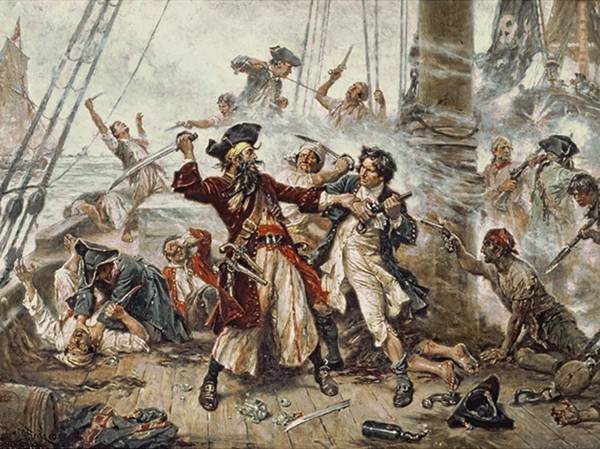 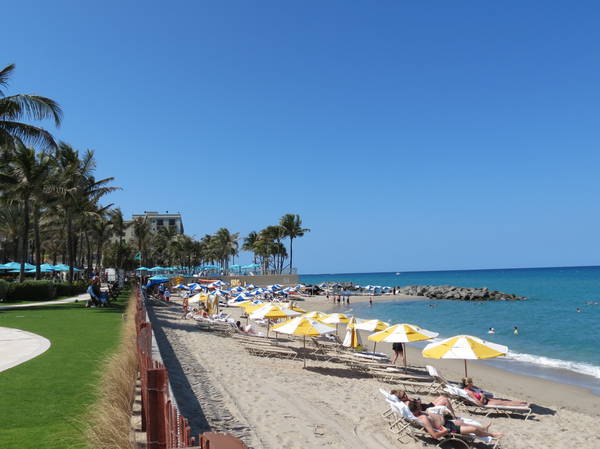 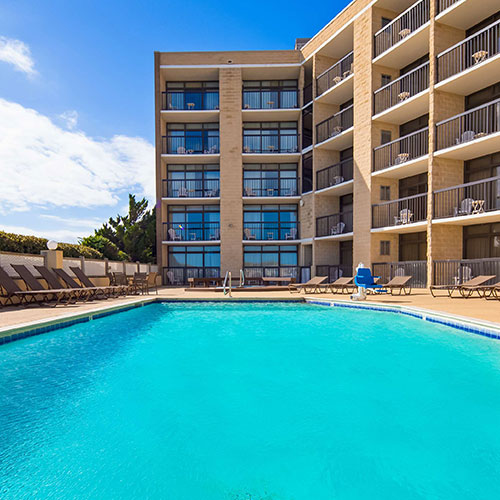