Shopping in St. LouisOur No. 1 tip for a rewarding St. Louis shopping experience: zero in on the neighborhoods. This is a spread-out city of many separate communities, each with its own distinct character. Here’s a quick rundown that can help you plan your shopping strategy.

The Central West End, just north and east of Forest Park, was created in the flush of expansion and prosperity that followed the 1904 World’s Fair. Today it’s one of the city’s most pleasant shopping destinations, a neighborhood of stately turn-of-the-20th-century homes, ornate lampposts, streets lined with giant oaks and lots of sidewalk cafés for people-watching when the weather’s nice.

The Hill, south of Manchester Avenue between Hampton Avenue and S. Kingshighway Boulevard, is an old, established residential neighborhood with a gaggle of great Italian restaurants and specialty food markets. The shelves at J. Viviano & Sons (5139 Shaw Ave.) are loaded with jars of black olive paste, cans of anchovy-stuffed olives, bags of lupine beans, almond confetti candy and blocks of Parmigiano-Reggiano (“the crown jewel of cheeses”).

South Grand is one of the city’s more ethnically diverse neighborhoods, and that’s reflected in the shops and restaurants that line the eight-block stretch of S. Grand Boulevard between Crittenden Street and McDonald Avenue. Shop for Indian spices, Japanese eggplants and green tea ice cream at Jay International Food Co. (3172 S. Grand Blvd.) or contemplate a tattoo or piercing from one of the friendly folks at TRX (3207 S. Grand Blvd.).

The city has a couple of worthy destination malls. Upscale Plaza Frontenac, just south of I-64/40 at the intersection of Clayton Road and Lindbergh Boulevard, caters to well-to-do St. Louisans with the only Saks Fifth Avenue and Neiman Marcus stores in town, along with trendy retailers like Tiffany & Co. and Louis Vuitton. The atmosphere here is elegant throughout; even the seating areas and restrooms are smartly stylish.

West County Center, at I-270 and Manchester Road in Des Peres, is a major mall anchored by JCPenney, Macy’s and Nordstrom. Among the more than 150 other retailers are familiar names like Ann Taylor, Brooks Brothers and The North Face. Anchors at the Saint Louis Galleria, I-64 and S. Brentwood Boulevard, are Dillard’s, Macy’s and Nordstrom, plus some 165 additional stores and boutiques.

Westport Plaza, in a mixed-use office complex just off I-270 and Page Avenue in the western burbs, is more a place to relax after shopping since it has pick-me-ups like Starbucks and the St. Louis Bread Co., a variety of casual and higher-end restaurants, happy hour hangouts and pubs with live music.

Bargain hunters head for St. Louis Outlet Mall, SR 370 (exit 11) and St. Louis Mills Boulevard. With more than 100 outlets—everything from Old Navy and The Children’s Place to Burlington and Bed, Bath and Beyond—there’s something for everyone. Refuel with a Wetzel’s pretzel.

Missouri farmers supply St. Louis farmers markets, and one of the best reasons to visit is for the cornucopia of locally grown fruits and veggies. The markets are also good places to pick up locally produced cheese, eggs, honey and baked goods. Shoppers in the know arrive early to snap up seasonal goodies like berries and heirloom tomatoes. And of course it’s fun to just wander around soaking up the sights and smells.

The granddaddy of them all is the Soulard Farmers Market (south of downtown at the corner of 7th and Carroll streets), which has been in business in one form or another since 1779. If you’re a first timer go on Saturday morning, when this big, bustling market is at its busiest and best. Shaped like a giant “H,” it has stall after stall of produce—fat melons, baskets of grapes, just-picked zucchini—as well as butchers, bakers and vendors selling everything from balsamic black bean dip to aromatic soaps. It’s open Wed.-Thurs. 8-5, Fri. 7-5, Sat. 7-5:30, year-round. Hint: Street parking is not plentiful and also metered, and regulations are strictly enforced; park in the free lot across 7th Street from the market.

Much smaller but equally appealing is the Kirkwood Farmers Market in downtown Kirkwood (150 E. Argonne Dr. at Taylor Avenue). Fresh, locally grown produce varies by season; in summer look for ripe peaches grown in Missouri’s “boot heel,” and ask about the recipe for turning them into a scrumptious peach pie. The Tropical Moose (“Tro Mo” to its loyal customers) snow cone stand sells the icy treats in more than 50 different flavors. The market is open from mid-April to late September (Mon.-Fri. 9-8, Sat. 8-5, Sun. varies by vendor), but Saturday mornings offer the best selection. In October it morphs into a pumpkin patch, stays open longer hours (daily 9-8) and has lots of activities for kids. From mid-November to December 24, the Christmas Market is open daily 9-9.

Smaller-scale shopping with a healthy dollop of historic charm prevails in nearby St. Charles. If you’re into antiques, crafts, gifts and collectibles, put St. Charles’ Main Street at the top of your day-trip list. 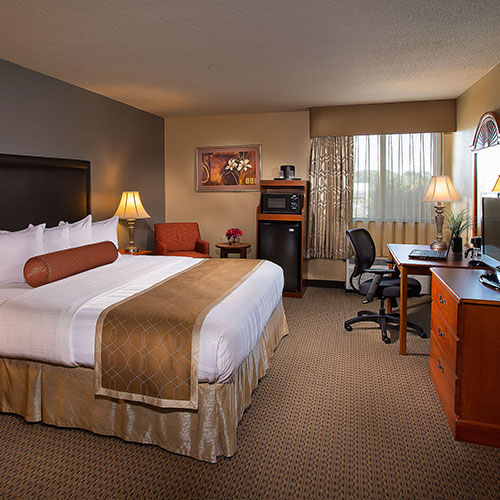