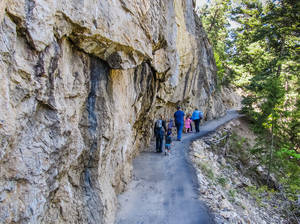 About SundanceSundance lies at the foot of Sundance Mountain, so named because the Sioux Native Americans held their councils and religious ceremonies at a place called Wi Wacippi Paha, or Temple of the Sioux. It is believed that Harry Longabaugh, better known as “The Sundance Kid,” assumed his nickname in Sundance during his 18-month sentence in the Crook County jail for horse stealing.

Sundance is a convenient departure point for trips to nearby Devils Tower National Monument and Black Hills National Forest. An 82-mile circle tour via US 14, SRs 24 and 111 and I-90 circles a portion of the national forest and offers opportunities to see the volcanic core of Devils Tower as well as pronghorns, wild turkeys and white-tailed deer.

Things to Do Crook County Museum and Art Gallery