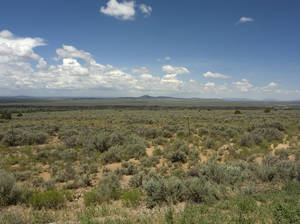 About TaosOriginally named Don Fernando de Taos by the Spanish, this northeastern New Mexico jewel has long been a lure. The natural setting in the shadow of the lofty Sangre de Cristo Mountains is glorious. There's a mystical quality that finds its most evocative expression through art. And how many other towns can you name that have a history embracing the Athabascans, Kit Carson and Dennis Hopper?

The Athabascan people (now referred to as Apaches and Navajos) began settling this area almost a thousand years ago. Adobe dwellings were constructed as early as 1350 A.D. at Taos Pueblo, which has the distinction of being considered the nation's oldest continuously inhabited community as well as being the only UNESCO Living World Heritage Site in the United States. The pueblo's two largest structures appear today much as they did in 1540, when the first Spanish explorers arrived. Searching for the “seven cities of gold” that supposedly contained unlimited riches, the Spaniards unfortunately came face to face with a very early urban legend.

Christopher Houston “Kit” Carson is a major figure in Taos lore. The Missouri-born frontiersman was a fur trapper before gaining renown as the guide for John C. Frémont's successful 1840s exploration of the Continental Divide—a trek that set off a flurry of expeditions charting the American West.

Carson later became a Taos rancher and a U.S. Army general who was instrumental in quelling a Navajo uprising in New Mexico. His legendary status grew from the publication of many dime store novels and pulp magazine stories. You can brush up on the “fighting trapper's” life at the Kit Carson Home and Museum and visit his grave in Kit Carson Park.

Flash back to a more recent time—the 1960s—when hippie communes began springing up in the region's spectacular high desert country. Actor/filmmaker Dennis Hopper came to New Mexico to scout locations for “Easy Rider,” a 1969 cult classic that vividly depicts the counterculture vibe of the time, partially filmed in and around Taos. He returned and lived here for 12 years. A 2010 memorial service for the two-time Oscar nominee was held at the historic San Francisco de Asis Church in Ranchos de Taos. Hopper is buried nearby.

What always has attracted people is the sheer beauty of the land. Adventurous sketch and watercolor artists in search of inspiration arrived along with railroad survey teams in the 1870s. The proposed Río del Norte and Santa Fe Railroad never came to fruition, and later efforts to bring rail service to town also failed. This has left Taos somewhat delightfully isolated despite the inevitable presence of modern highways.

It was illustrator Ernest Blumenschein who really got the town's artistic ball rolling. On a covered wagon trip to the Southwest in 1898, he and colleague Bert Phillips were forced to stop in Taos to repair a broken wheel. They became enthralled with the surroundings during their brief stay, and both eventually settled in permanently. In 1915 Blumenschein helped form the Taos Society of Artists, which established the town as an artists' colony with a bent for the eccentric; creative types have gravitated here ever since.

The heart of Taos is Taos Plaza, just off Paseo del Pueblo Norte between Kit Carson Road and Camino de la Placita. It dates back to the late 18th century and has long been a local meeting place. A big cottonwood tree stands in the center of this small plaza; in spring and summer its shiny green leaves flutter in the slightest breeze and then turn bright yellow in the fall, providing a lovely contrast to the azure blue sky.

The plaza's gazebo was donated by Mabel Dodge, a transplanted New York socialite and art connoisseur who came to town in 1918, married Taos Indian Tony Luhan and championed New Mexico's Indian culture and natural beauty to contemporaries like Georgia O'Keeffe, D.H. Lawrence and Ansel Adams. This is a perfect spot to relax and set your internal clock to a more laid-back rhythm.

Taos also provides plenty of outdoor action for active types who aren't content to sit and contemplate. The nearby Rio Grande makes the area a popular starting point for river rafting excursions. During high-water season, from late April to mid-June, the thrills range from relatively gentle to pulse pounding (the latter courtesy of the infamous Taos Box, 16 miles of wilderness gorge and physically demanding rapids). Outfitters are based in town and in Santa Fe.

SRs 522 and 38 and US 64—the Enchanted Circle Scenic Byway—encircle Wheeler Peak, offering a multitude of spectacular vistas. About a half hour's drive north of Taos via SR 522 is the tiny, historic village of Questa, one of a long string of villages scattered up the Rio Grande into southern Colorado. Founded in 1842, the isolated settlement was subject to Ute raids for generations. The location still feels remote, and thankfully its beauty remains unspoiled.

The focal point of the community is a thick-walled adobe church that gave the village its original name, San Antonio del Río Colorado. “Questa” was an Anglo attempt at simplification that became an official misspelling of the Spanish cuesta, or ridge, where the church plaza was built.

Lovely scenery surrounds Questa. Hiking trails descend into the Rio Grande Gorge and wind around lakes nestled in the Sangre de Cristo Mountains. Thanks to a location between the Carson National Forest and the Rio Grande del Norte National Monument, this region offers outdoor recreation galore, from mountain biking and fishing to horseback riding excursions and hiking treks with a llama-riding guide.

Self-guiding ToursA walking tour map of the city's historic district and Taos Plaza is available from the visitor center.

ShoppingMany shops at Taos Plaza veer more toward souvenirs, T-shirts and knickknacks than fine art, but it's such a relaxed hangout that you'll want to poke around anyway. Indulge your sweet tooth at the Rocky Mountain Chocolate Factory (next to LaFonda Hotel) before browsing the merchandise at places like the Taos Trading Co. or Mesa's Edge Jewelry.

Taos Blue (101 Bent St., just off Paseo del Pueblo Norte) offers finely handcrafted Southwestern and northern New Mexico art—pottery, jewelry, beadwork, medicine bags, Kachina dolls and the like. The gallery also sells fetishes, which are small carvings of animals made from turquoise, mother of pearl and other materials. Created by the Zuni for ceremonial purposes, they're prized by collectors of contemporary Native American art.

The town's thriving art scene, in fact, lures collectors from around the country. Ledoux Street, a block southwest of the plaza, is lined with galleries like 203 Fine Art (203 Ledoux St.), the Inger Jirby Gallery (207 Ledoux St.) and the R.C. Gorman Navajo Gallery (210 Ledoux St.). Local merchants usher in the holiday season with Lighting Ledoux, held in early December.

There are more galleries along Kit Carson Road just east of the plaza. Parsons Gallery of the West (122-D Kit Carson Rd.) features vintage Western art; the Thom Wheeler Studio Gallery (939 Kit Carson Rd.) has paintings and sculptures. Cowboy collectibles and Western-style furnishings are on display at Horse Feathers (109 Kit Carson Rd. next to the Kit Carson Home and Museum).

Take home a bit of Taos history from the El Rincón Trading Post (114 Kit Carson Rd.). Established in 1909, it actually was a trading post back in the day. In addition to Indian pottery, baskets and rugs, this is a great place to hunt for old turquoise jewelry pawned more than a century ago. The store also has a museum with a collection of Western and Indian artifacts—everything from buckskin britches to peyote fans (used for powwow ceremonial dances).

NightlifeTaos isn't known for frenetic nightlife; options here are mellow and mostly revolve around live music. The Adobe Bar (125 Paseo del Pueblo Norte in The Historic Taos Inn), fondly known as “the living room of Taos,” is the place to go if you want to mingle with Taoseños. There's live music every night of the week—everything from jazz, bluegrass and alt-country to flamenco, Celtic and native folk music. Better yet, there's no cover charge. The list of creative margaritas includes the inn's famous “Cowboy Buddha.”

The Alley Cantina (just off the plaza at 121 Teresina Ln.) is a lively restaurant and bar where singles congregate at happy hour and diners scarf down the highly regarded fish and chips. This is said to be the oldest building in Taos, although only parts of the walls can make that claim. Legend also has it that Teresina Bent, daughter of 19th-century territorial governor Charles Bent, haunts the premises. Local bands play several nights a week.

Another popular nightspot is the Anaconda Bar (317 Kit Carson Rd. in the El Monte Sagrado Resort), where the decor includes a snake sculpture slithering across the ceiling and a massive saltwater aquarium. Live entertainment takes place Friday and Saturday evenings beginning at 10.

Or you could just hang out in Taos Plaza. When the weather's warm the plaza becomes a magnet for locals and tourists alike. But it's Taos Plaza Live (every Thursday evening from late May to early September) that brings out the crowds. Two bands perform at each show, and the musical lineup is eclectic: rock, jazz, blues, country, traditional New Mexican and Native American. Performances start at 6; admission is free.

Things to Do E.L. Blumenschein Home and Museum 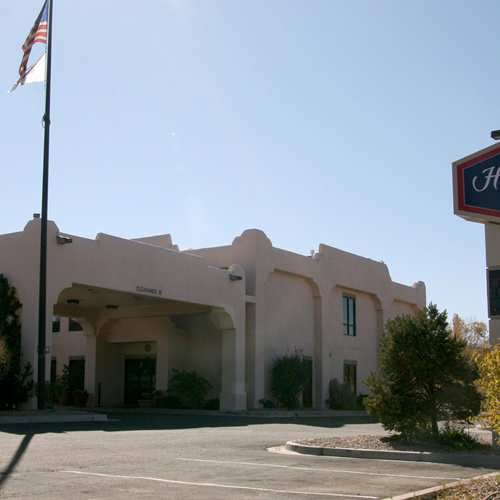 AAA Rate from
Inn On The Rio 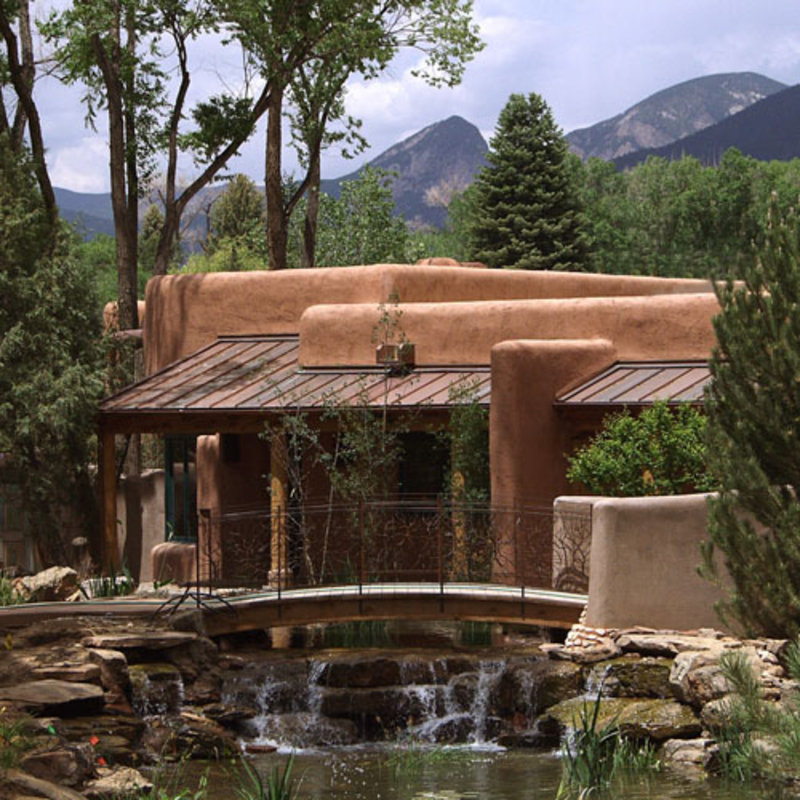