About Bryce Canyon National Park Bryce Canyon National Park is 26 miles southeast of Panguitch via US 89 and SRs 12 and 63. Among the park’s amazing things to see are some of Earth's most colorful rocks, which have been sculpted by erosion into pillars called “hoodoos,” and other fantastic forms. Iron oxides give red, yellow and brown tints to the limestone, while manganese oxides lend a lavender hue. 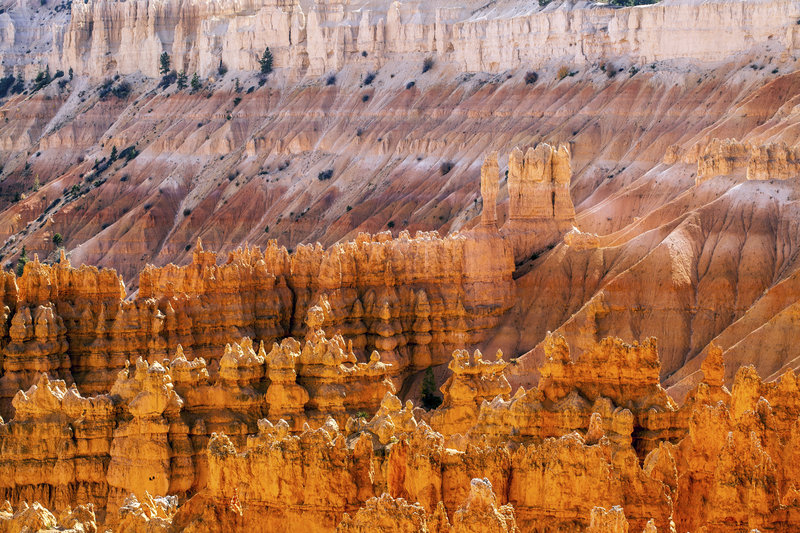 johnandersonphoto/iStockphoto.com
The area's difficult topography led Mormon settler Ebenezer Bryce, whose cattle grazed in the mazelike twists of the canyons' stream beds, to declare it “a hell of a place to lose a cow.” Bryce is not a true canyon but a series of horseshoe-shaped amphitheaters carved in the edge of the Paunsaugunt Plateau by tributaries of the Paria River. A Native American name for the area translates as “red rocks standing like men in a bowl-shaped canyon.”

General Information about Bryce Canyon National ParkThe park is open all year. The main geological features of the park are easily seen from numerous roadside viewing areas. Note: Visitors are advised to avoid using Cottonwood Road to access the park; the road is dangerous and inclement weather may further impair driving conditions. Visitors can take a 37-mile round-trip on a road that follows the high rim to many major vantage points, such as Bryce Point, Inspiration Point, the Natural Bridge, Paria View, Sunrise Point, Sunset Point and Rainbow Point, at the park's end. A free shuttle service with 13 designated stops is available throughout the park late May through September.

Hiking and horseback riding are among the park’s many fun things to do. Hiking trails descend below the rim, affording close views of colorful formations. Horseback tours provide another way of seeing the park's geology up close. The most brilliant hues in the park come alive with the rising and setting of the sun. Since the park is on an 8,000- to 9,000-foot plateau, hikers should allow for adjustment to the altitude. Camping is available in improved sites and backcountry areas throughout the park; for reservations phone the National Recreation Reservation System at (877) 444-6777, or TTY (877) 833-6777.

ADMISSIONADMISSION is $35 (per private vehicle); $30 (per person arriving by motorcycle); $20 (per person arriving by other means). Generally, the above fees permit entrance to the park for 7 calendar days from date of purchase. An annual pass is $40. A backcountry camping permit, available at the visitor center, is $5. The camping fee is $20 ($30 for RVs).

PETSPETS are permitted in the park only if they are on a leash, crated or otherwise physically restricted at all times. Pets are not allowed on trails or viewpoints or in any of the public buildings.

Things to Do Bryce Amphitheater