More About
Yale, BC
Attractions 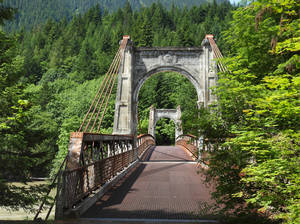 About YaleSettled at the southern entrance to Fraser Canyon, Yale was a major steamship port during the gold rush. The town was established in 1848 as a Hudson's Bay Co. fort, taking its name from the commander of Fort Langley. After gold was discovered on Hill's Bar in 1858, Yale's population swelled to 30,000. In later years the number dwindled to 200. Several buildings from the mid-1800s still stand, and a pioneer cemetery contains Victorian monuments to early settlers.

The Alexandra Suspension Bridge, 22 kilometres (14 mi.) north of town, was constructed in 1863 to ferry miners across the Fraser River. From the bridge, which was rebuilt in 1926 with the original foundations, the original wagon road to the Cariboo goldfields is visible and is home to a small 22.25-hectare (55-acre) provincial park. A hiking trail leading to the nearby Spirit Caves offers views of the canyon.

Things to Do Yale Historic Site