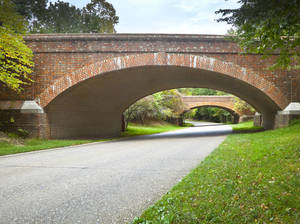 About YorktownYorktown, founded in 1691, was a busy 18th-century tobacco port. The town is best remembered for the Siege of Yorktown, which effectively ended the Revolutionary War. Less than 100 years later, Yorktown was embroiled in another major battle when Union general George McClellan landed his troops at Fort Monroe in 1862 and opened the Peninsular Campaign.

Gen. John Magruder, commanding the Confederate forces, fortified Yorktown and threw a line of trenches from town to the James River. Magruder marched his outnumbered forces back and forth behind the fortifications and convinced McClellan that he was facing a force twice the size of his own.

So convincing was Magruder's charade that the Union forces slowed their advance and began to besiege the town. Rather than face the Union artillery amassing in Yorktown, Gen. Joseph Johnston, replacing Magruder, moved his troops toward Williamsburg. The Union forces moved into Yorktown and retained control throughout the rest of the war.

Ten 18th-century buildings survived the 1781 Battle of Yorktown and can still be seen. While most are private, several are open to the public, including Nelson House and Moore House; phone (757) 898-2410. The restored Somerwell House, at Main and Church streets, was once an 18th-century inn and is now a retail establishment that sells 17th- and 18th-century reproductions of ceramics, glassware, furniture and prints. The free Yorktown Trolley, which operates spring through fall, stops approximately every 20-25 minutes at nine locations in the historic area.

The headquarters and the Yorktown Battlefield Visitor Center of Colonial National Historical Park are on the northeast edge of town at the end of the Colonial Parkway. For further information about the park and homes phone (757) 898-2410.

Self-guiding ToursBrochures detailing a self-guiding walking tour of Historic Yorktown are available from the information center/gallery. The route begins at York Hall, 301 Main St., and showcases more than 50 noteworthy sites, structures and museums.

Things to Do American Revolution Museum at Yorktown