About YumaTucked into Arizona's southwestern corner, Yuma is on the Arizona-California state line not far from the Mexican border. The town occupies a historically important spot on the Colorado River where it narrows between two granite outcroppings, creating the easiest crossing for many miles.

Although he was not the first white man to visit the area, Father Eusebio Francisco Kino was the first to recognize the Yuma Crossing as the gateway to California. Yet Kino's discovery would not be used for almost a century until Juan Bautista de Anza, presidial captain of Tubac, arrived in search of an overland route to California through Yuma in 1774. The Anza expedition reached Mission San Gabriel, near present-day Los Angeles, in March of that year.

In 1779 two missions were founded at the crossing by Father Francisco Garcés, who, along with all the colonists, was later killed during the last major uprising of the Quechan Indians in 1781. The Spanish retreated and never again tried to dominate the Quechan or control the Yuma Crossing.

After Mexico won its independence from Spain in 1821, the area became part of the new nation's northern territories, but the Mexican government's control over these territories was compromised by economic decline and internal conflict. At the same time, mountain men—American trappers and explorers who acted as guides for settlers heading west—began blazing new trails into the region.

During the Mexican-American War (1846-48), the U.S. Army organized a unit of Mormon volunteers that set out on a difficult march covering nearly 2,000 miles between Council Bluffs, Iowa, and San Diego. In doing so, they blazed a wagon trail that crossed the Colorado River at Yuma. A bronze statue in Yuma's West Wetlands Park, 2200 W. Water St., commemorates the Mormon Battalion's historic trek across the Southwest.

Gold seekers by the thousands poured through Yuma during the California gold rush of 1849, using a rope ferry at present-day Main Street to cross the Colorado River. It wouldn't be until 1873, however, that the city was formally named Yuma, having previously been called Colorado City and later Arizona City.

Pivot Point Interpretative Plaza, 200 N. Madison Ave., preserves the last remnants of the pivoting railroad bridge that once allowed trains to cross the river but also could swing wide to let steamboats pass. The plaza includes a landscaped park with interpretive panels; a 1907 Baldwin steam locomotive; an audio installation re-creating sounds of a train, a steamboat and the bridge swinging aside; and at night, a light display with twin laser beams tracing the old bridge's route across the river. A pedestrian pathway links the plaza to Gateway Park.

Yuma is host to a number of outdoor events. The city becomes flooded with dove hunters when hunting season opens September 1 and the population nearly doubles during the winter months as snowbirds arrive to enjoy the sunshine. Golf is a popular pastime with 13 lush golf courses from which to choose. The visitors bureau offers field-to-feast agriculture tours of the area's number one industry, while the Yuma Lettuce Days Festival takes place in late March or early April.

ShoppingYuma Palms Regional Center, at 16th St. and I-8, is anchored by Dillard's and JCPenney.

Things to Do Arizona Historical Society/Sanguinetti House Museum and Gardens 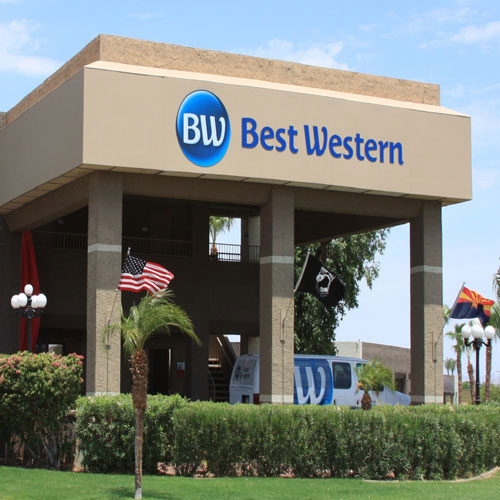