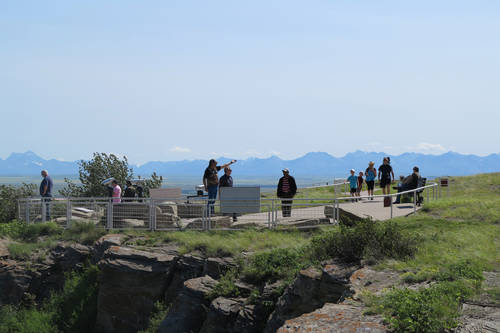 Head-Smashed-In Buffalo Jump Interpretive Centre
1 Photo
AAA Editor Notes
Head-Smashed-In Buffalo Jump Interpretive Centre is 3 km (1.9 mi.) n. on Queen Elizabeth II Hwy., then 16 km (10 mi.) w. on Hwy. 785. For at least 6,000 years people of the Plains First Nations stampeded herds of buffalo over sandstone cliffs to their deaths. The hunters then butchered the kill at their campsite below the cliffs. This is one of the oldest, best-preserved buffalo jump sites. A theater screens a 12-minute film that re-creates the buffalo hunts. The hunting grounds are preserved, and short trails lead to the main areas.

The site's name is derived from a young brave who stood under a ledge of the cliff to watch the buffalo as they fell past him. As the number of carcasses multiplied, his skull was crushed as he became trapped between the animals and the cliff. Built into that cliff today is a seven-story interpretive center with displays. Exhibits focus on the geographical and climatic factors affecting these tribes as well as their lifestyle and history.