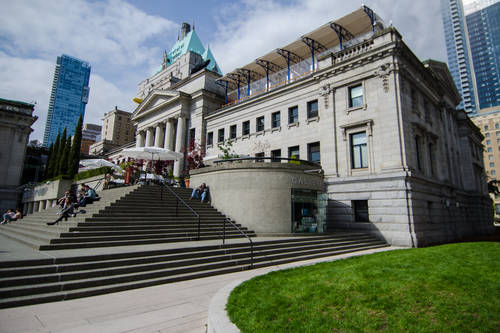 Wikimedia Commons / CC BY/Jeff Hitchcock
1 Photo
AAA Editor Notes
Vancouver Art Gallery is downtown at 750 Hornby St.; the museum encompasses a city block bounded by Georgia, Howe, Robson and Hornby sts. One of the largest art museums in Western Canada occupies a turn-of-the-20th-century building that originally was intended to serve as a provincial courthouse. Its stately exterior is a contrast to much of the art inside, which tends to reflect the creative energy and hip, progressive style that the city itself embodies.

While historical masters are given their due, the focus of the gallery's changing thematic exhibitions is on contemporary artists and works from groundbreaking new visionaries that veer toward the cutting edge. The museum's four floors of mixed-media installations contain works by Emily Carr and other well-known Canadian artists.