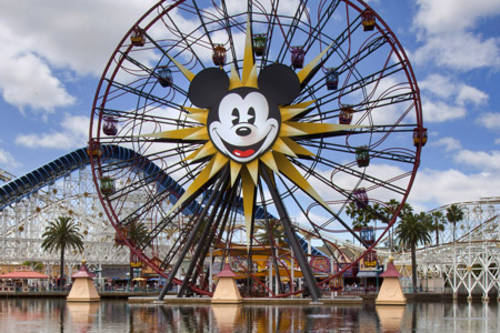 The experience begins on Main Street, U.S.A., inspired by Walt Disney's hometown of Marceline, Mo. Old-fashioned buildings house shops and restaurants as well as Main Street Cinema and The Opera House, all recalling the essence of small American towns at the turn of the 20th century. Disneyland Railroad offers 18-minute rides around the park with four stops.

Fantasyland wows guests with its colorful scenes from classic Disney films and its sheer number of attractions. Disney princesses await guests at Fantasy Faire, an enchanting, immersive storybook world. At Fantasyland Theatre “Mickey and the Magical Map,” a live show, is presented; Mickey and other Disney characters embark on a series of musical adventures with a sorcerer's map.

The 3-D images and special effects inside Sleeping Beauty Castle capture Princess Aurora and Prince Philip's love story, and through the castle drawbridge the horses and twinkling lights of the King Arthur Carrousel are visible.

Dumbo the Flying Elephant and the Casey Jr. Circus Train rides recall the film starring the adorable blue-eyed elephant who could fly. Alice in Wonderland and the Mad Tea Party attractions re-create the fantastical world young Alice encountered in her adventures.

Other attractions star Snow White, Peter Pan, Pinocchio and Mr. Toad. There are also canal boat rides through Storybook Land; the Matterhorn Bobsleds, a high-speed bobsled run through the Alps; and “it's a small world.”

Tomorrowland touts futuristic ideas and out-of-this-world adventures. Space Mountain sends riders on a dark thrill ride among satellites and shooting stars—but only after they've been prepped by the control crew. Star Tours—The Adventures Continue is a simulation ride with 3-D effects starring characters from the “Star Wars” films. Guests can take a ride aboard Astro Orbitor, where they control the height of their revolving spaceship; drive the roadways of Autopia in cars with distinctive personalities; or take the Buzz Lightyear Astro Blasters challenge. Technology allows guests to see and hear Nemo and friends alongside their vessel on the Finding Nemo Submarine Voyage.

Frontierland re-creates the 19th-century American West. At Big Thunder Mountain Railroad guests depart a mining camp aboard open-air ore cars and encounter a swarm of bats, a raging waterfall and an underground earthquake. At Frontierland Shootin' Exposition, an infrared rifle arcade, take aim at Old West targets. Pirate's Lair on Tom Sawyer Island holds secrets and treasures. For a change of pace, take a 14-minute ride aboard the Mark Twain riverboat or a 15-minute ride on the Sailing Ship Columbia.

Adventureland delivers on its name, especially with the Indiana Jones Adventure. In four-wheel-drive vehicles, passengers venture across rutted, bumpy roads to encounter ancient ruins, clouds of smoke and fire, bubbling lava pits and a menacing temple deity. The Jungle Cruise navigates the waters of a tropical rain forest that is home to exotic animals and a waterfall. Try Tarzan's Treehouse climb-through experience, then take a well-deserved break with the singing birds and flowers at Walt Disney's Enchanted Tiki Room.

New Orleans Square re-creates the city of a century ago with iron-trellised balconies; narrow, winding streets; sidewalk cafés; and street musicians, but watch out for seedy characters in this idyllic setting. Animatronic buccaneers burn and plunder a town in the Pirates of the Caribbean attraction, and the Haunted Mansion is the domain of 999 ghosts who cavort through dark, cobwebbed halls. The ghostly manor transforms into Haunted Mansion Holiday during the fall months when Halloween and Christmas collide thanks to Jack Skellington and co. from “The Nightmare Before Christmas.”

Critter Country is home to The Many Adventures of Winnie the Pooh a heartwarming journey with the beloved friends of the Hundred Acre Wood. If you like being on the water, consider joining a 20-passenger canoe ride at Davy Crockett's Explorer Canoes.

The Disneyland fireworks show lights up the park and includes projections upon multiple locations. You can also enter Mickey's dream at the Fantasmic! night show, which features music, entertainment and fireworks.

Star Wars fans can explore the remote planet Batuu, fly aboard the Millennium Falcon in an interactive smuggling mission, and board a Star Destroyer in the new 14-acre Star Wars: Galaxy's Edge.