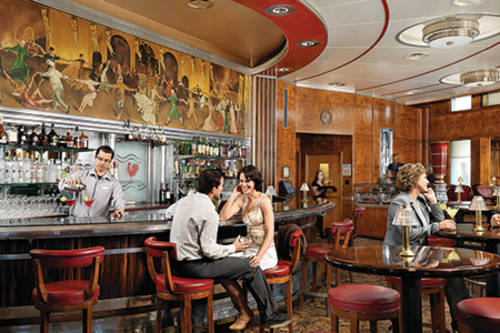 Courtesy of Queen Mary
1 Photo
AAA Editor Notes
Queen Mary is at 1126 Queens Hwy. and can be reached via Queensway Bridge or I-710. The Queen Mary, one of the largest passenger liners ever built, is permanently docked in Long Beach Harbor. A self-guiding audio tour (available in English, Spanish, French, German, Mandarin Chinese and Japanese) includes the bridge, officers’ quarters, engine room, isolation ward and upper and lower decks of the ship. The 121-seat theater features a short film with 4-D effects.

Exhibits on the Promenade Deck detail the evolution of passenger ship transportation and house 10 model ships. At The Shipyard gallery, visitors can see a 26-foot-long model of the Queen Mary made of 250,000 LEGO bricks and also build their own model ship. Haunted Encounters is an interactive exploration of the paranormal, based on reported events. Other tours are available.