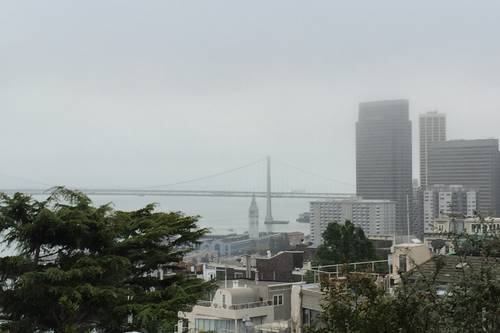 AAA. Photo submitted by Nancy Jones/Nancy Jones
1 Photo
AAA Editor Notes
Coit Tower stands atop Telegraph Hill. This 210-foot-tall, Art Deco-style tower was built in 1933 with money provided by eccentric philanthropist Lillie Hitchcock Coit, who had an interest in blazes and was thus a longtime friend of the city's firefighters. Despite its appearance and a persistent urban legend, the tower's resemblance to a fire hose nozzle was not intentional.

One of the noteworthy features is a series of fresco murals in the lobby, painted in 1934 as part of the New Deal Public Works of Art Project. Inspired by Mexican muralist Diego Rivera and created by 25 artists who worked for an hourly wage of $1, they depict the lives of the state's Depression-era working class.

A vintage elevator zips visitors to the observation deck at the top in 66 seconds for panoramic views (unless it's foggy) of North Beach, Lombard Street, the Golden Gate and Bay bridges, and Alcatraz Island. Depending on the time of year there may be a wait for the elevator.

Time and weather have taken their toll, and the tower closed in late 2013 to repair a leaky roof and some water damage to the murals. It reopened in 2014 with refurbished art and a new concession stand for visitors, but Coit Tower has always been less tourist attraction than local landmark beloved by longtime residents.

Note: Parking in the tower lot is very limited, and at peak times the line of cars waiting to park can be long. Muni's #39 bus runs between the base of the tower and Fisherman's Wharf.