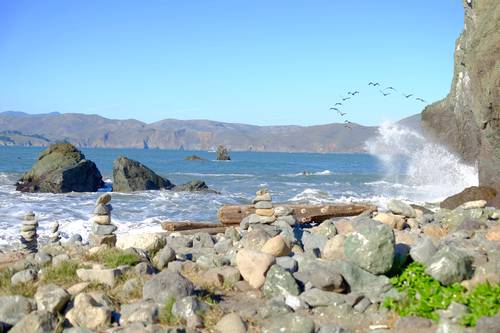 iStockphoto.com/alexsullivan
1 Photo
AAA Editor Notes
Lands End is accessible from Point Lobos Ave. and Merrie Way. This little patch of wilderness at the outer western edge of urban San Francisco, overlooking the Pacific Ocean, is part of Golden Gate National Recreation Area. It's a great place for a quiet, relaxing hike, taking in a plethora of scenic views and otherwise escaping the city's bustle for an afternoon.

The California Coastal Trail runs the length of Lands End. The western end is near the Sutro Baths. You can access the eastern end from 32nd Avenue and El Camino del Mar, at the western edge of the Sea Cliff neighborhood. From here it's just a few steps to Eagle's Point, an overlook with a great view of the Golden Gate Bridge, particularly on sunny days.

From Eagle's Point the Coastal Trail winds west through a forest of tall conifers and a lush tangle of undergrowth that includes seasonal wildflowers. Closer to the Sutro Baths the trail widens and runs along the edge of tall cliffs. There are frequent views of offshore rocks and the Marin Headlands across the water (this is the geographic point where bay and ocean merge). A couple of steep sections have steps built into the trail.

Toward the western end is a memorial to the men who died on the USS San Francisco during the Battle of Guadalcanal on Nov. 12-13, 1942. The memorial, a piece of the ship's bridge, stands above the Coastal Trail along the parallel El Camino del Mar Trail.

Note: There are free parking lots off Point Lobos Avenue in Sutro Heights Park. The #1 and #38 Muni bus lines stop a block away from the entrance to Lincoln Park at 34th Avenue and Clement Street. Walk up Legion of Honor Drive to the Legion of Honor parking lot, then follow the walking path that skirts the Lincoln Park Municipal Golf Course and runs into the Coastal Trail. You can also get off the #1 bus at California Street and 32nd Avenue and walk north two blocks on 32nd to El Camino del Mar at the trail's eastern end.