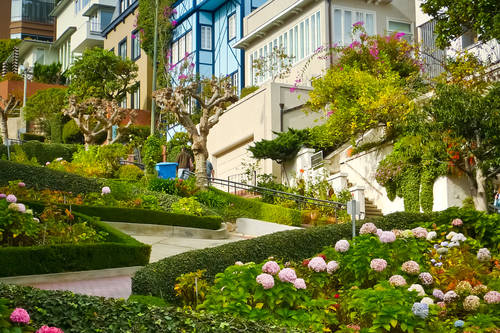 Shutterstock.com/Mario Savoia
1 Photo
AAA Editor Notes
Lombard Street is often referred to as “the crookedest street in the world”—at least the brick-paved block between Hyde and Leavenworth streets. It descends a 40-degree slope in a series of eight tight S-curves. The crookedest claim really should belong to an even more winding stretch of Vermont Street on Potrero Hill, but Lombard is decidedly more scenic. Handsome homes and condos stand on either side, bougainvillea covers walls and the block is landscaped with sculpted hedges and hydrangea plants that bloom seasonally.

If you'd rather walk than take the one-way, 5-mile-per-hour drive down the curvy switchbacks, there are stairways on each side of the street. While Lombard attracts a constant stream of shutterbugs, it's actually difficult to get a photo that clearly shows the series of S-curves due to the steep grade. Campers, trailers and skateboarders are prohibited.

Note: There may be restricted vehicle access between Hyde and Leavenworth on some weekends (residents of that block are exempt), an attempt to improve safety for pedestrians in the vicinity. Visitors who drive down the block and/or stop to take pictures often cause lengthy traffic delays, especially during the busy summer tourist season.