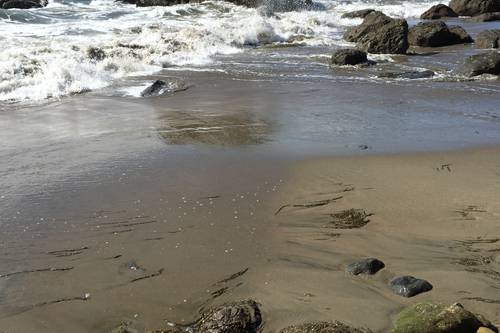 AAA/Greg Weekes
1 Photo
AAA Editor Notes
Mile Rock Beach is reached via a stairway off the Coastal Trail that descends to the beach; the detour at the trail's approximate midway point is signed. At the bottom of the steps you can walk farther down to a pebble and boulder-strewn cove where waves crash impressively against the rocky shoreline and there's a view of the Golden Gate Bridge in the distance.

You'll sometimes see impromptu rock sculptures—several smooth, flat stones carefully balanced on top of a larger rock and looking somewhat like a stack of pancakes—assembled by an unknown artist indulging his or her creative side. The weather is often overcast or foggy, but on a sunny day the beach is a wonderful spot to sit on a log and contemplate your surroundings. To the right a dirt trail winds up a steep hill to a vantage point offering spectacular views, both of the beach below and looking out over the water to the Marin Headlands.

On a small plateau atop the hill is the Lands End Labyrinth. An assemblage of rocks placed in concentric circles, it was created by local artist Eduardo Aguilera in 2004 and added a bit of mystery to a tucked-away corner of the city. Sadly, this intriguing work of art has been destroyed and then rebuilt many times over the years due to vandalism, most recently in 2015.