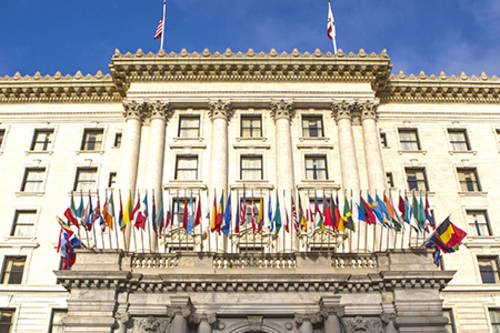 123RF/piccaya
1 Photo
AAA Editor Notes
Nob Hill, in the vicinity of California, Sacramento, Jones and Taylor sts., was the center of luxurious living in the last half of the 19th century, when men who had made fortunes in railroading and gold mining built their mansions atop this then-windswept crag. Almost all of them were destroyed by the fire that resulted from the 1906 earthquake, but this elevated location has always signified prestige, and today Nob Hill bristles with elegant apartment buildings and swanky hotels.

Visitors who don't want to make the arduous trek on foot up Jones or Taylor streets can take advantage of the Powell/Mason or California Street cable car lines, a less physically demanding and more enjoyable way to see the sights. Grace Cathedral is a Nob Hill landmark. Another intriguing institution is Masonic Auditorium, 1111 California St. In addition to being one of the city's notable venues for live jazz, it features stained-glass windows that depict symbols associated with the Freemasons, a long-standing fraternal organization whose membership once included George Washington, Benjamin Franklin and Henry Ford.