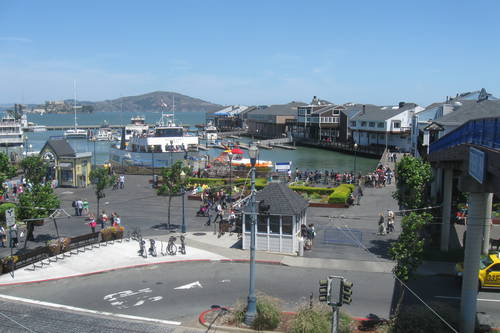 AAA/Greg Weekes
1 Photo
AAA Editor Notes
Pier 39 is at Beach St. at the northern end of The Embarcadero. This waterfront shopping and dining complex is touristy with a capital “T.” And that's definitely not a bad thing if you’re looking for souvenirs, mementos, keepsakes or kitsch. “I Escaped From Alcatraz” T-shirts? “I ♥ San Francisco” sweatshirts? Snow globes? Fridge magnets? They’re all here, and much more.

Shops are primarily of the gift variety, selling collectibles, candy and casual clothing. Along with waffle cones, mini doughnuts and hot pretzels, the food options include favorites like clam chowder in a sourdough bread bowl and freshly caught seafood. Jugglers, musicians and acrobats provide free entertainment at the rear end of the pier, and musicians also perform daily at the entrance plaza.

Sea lions have been one of The PIER's chief attractions since 1989, when they began showing up just after the Loma Prieta earthquake. Lolling on floating docks built especially for them, uttering their distinctive bark, engaging in mock shoving matches or lazily rolling over like a dog playing dead, the whiskered marine mammals almost seem to pose for camera-toting tourists who position themselves for that one special shot.

In late 2009 almost all of the sea lions mysteriously disappeared. No one really knows what was behind the defection, although biologists suspect that changes in the food supply drove them elsewhere. Since then they've made something of a comeback, their numbers fluctuating depending on the time of year (you'll see fewer pinnipeds during the summer months). Learn more about them at the Sea Lion Center just above K-Dock.