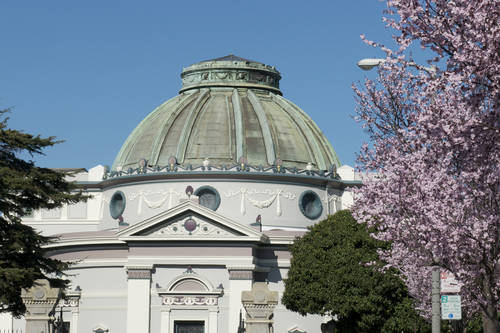 mcswin/iStockphoto.com
1 Photo
AAA Editor Notes
San Francisco Columbarium is a blk. s. of Geary Blvd. at One Loraine Court. In the Richmond District, just a short distance from busy Geary Boulevard, stands a little-known but fascinating part of early San Francisco history. The columbarium (a vault providing storage for urns that contain the ashes of deceased individuals) was built in 1898 for the Odd Fellows fraternal organization and was originally surrounded by a cemetery and crematorium. After falling into disrepair in the 1930s, it was restored in 1980.

This circular, domed Beaux Arts building has lovely stained-glass windows and contains more than 8,500 niches on three floors, collectively housing the cremated remains of an estimated 40,000 people. Each niche has a copper or a glass cover, and it is the glass-covered niches that offer a peek at past lives in the form of photos, notes and personal mementos—everything from birthday cards to San Francisco Giants caps. Three smaller buildings on the grounds collectively add some 5,300 additional spaces.