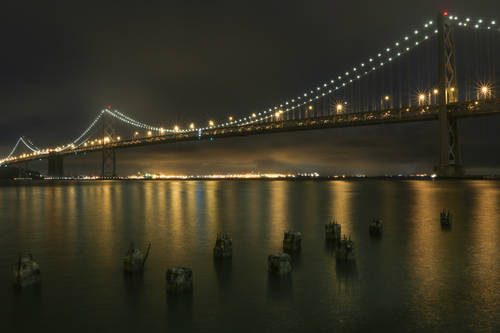 In addition to the opening of the east span, a high-profile art installation put the Bay Bridge in the spotlight—literally. In March 2013 the Bay Lights Project was unveiled. Created by artist Leo Villareal, it is the world's largest LED light sculpture. More than 25,000 LEDs were strung along nearly 5 miles of the west span's suspension cables, with custom software generating a constantly shifting series of glowing patterns that have an ethereal beauty.

The lights are impressive viewed from such elevated locations as the Coit Tower parking lot atop Telegraph Hill or the upper floors of high-rise hotels like the Mandarin Oriental San Francisco, on Sansome Street in the Financial District. Great on-the-ground perspectives of the bridge from an up-close vantage point are along The Embarcadero from the Ferry Building south to Rincon Park (at Folsom Street).

The Bay Lights went dark in early March 2015. They were such a huge hit, however, that a fundraising effort came up with enough money to finance an improved, longer-lasting version of the light sculpture. Following an extended period of bridge cable cleaning, the new lights were unveiled Jan. 30, 2016.