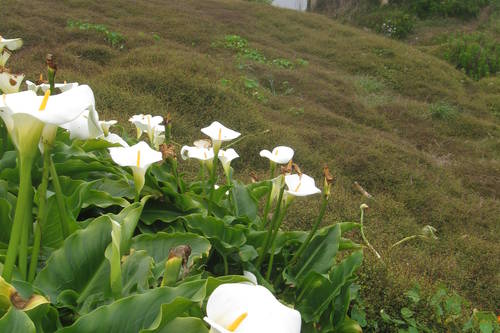 AAA/Greg Weekes
1 Photo
AAA Editor Notes
Sutro Baths site is off Point Lobos Ave. in Sutro Heights Park. These ruins are the only evidence of a lavish playground developed by wealthy former mayor Adolph Sutro that opened to the public in 1896. Standing literally at the ocean's edge, it boasted seven swimming pools (six saltwater and one freshwater), more than 500 private dressing rooms, an amphitheater, grand staircases and landscaped promenades, all looking out over the Pacific.

The extravagant structure was prohibitively expensive to operate, which led to its eventual closing. Fire destroyed the Sutro Baths in 1966 as it was in the process of being demolished. Nothing remains but a destroyed foundation, rusted pipes jutting out from vestiges of walls and long-abandoned stairways—and every inch of it can be explored. One interesting feature is a short tunnel that leads to a small opening with a view of waves crashing against the rocks.

Among the tangle of vegetation carpeting the hillside above the ruins is the bright green, fleshy-leaved ice plant, a low-growing succulent that blankets the sand dunes at many northern California beaches. Ice plants produce pretty pink and yellow flowers at various times of the year. Adding to the scenic quotient are expansive views of the ocean and the Marin Headlands. Stairways, paved walking paths and dirt paths descend from Point Lobos Avenue and the Coastal Trail.

Note: There are no guards on duty, and no guardrails or other protective aids; poke around at your leisure but also at your own risk. Watch for slippery spots near the water, and heed all warning signs.