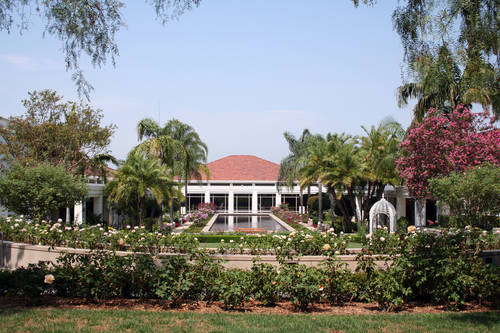 Wikimedia Commons/flickr
1 Photo
AAA Editor Notes
Richard Nixon Presidential Library and Museum, 18001 Yorba Linda Blvd., includes museum galleries, gardens and the farmhouse in which Nixon was born in 1913 and lived until he was 9 years old. The Katherine B. Loker Center contains a detailed replica of the stunning White House East Room, location of Presidential addresses, press conferences and state dinners.

Exhibits include a detailed re-creation of Nixon's Oval Office, a 12-foot-high section of the Berlin Wall and priceless state gifts and artifacts from the Apollo space missions. Informative galleries provide insight into the Vietnam War and Watergate as well as Nixon's historic trips to China, the Soviet Union and the Middle East. A helicopter that served as the “Flying Oval Office” during the Kennedy, Johnson, Nixon and Ford administrations is on the grounds. The library houses an archive research center. Also on the grounds are the gravesites of President Nixon and his wife, Pat.