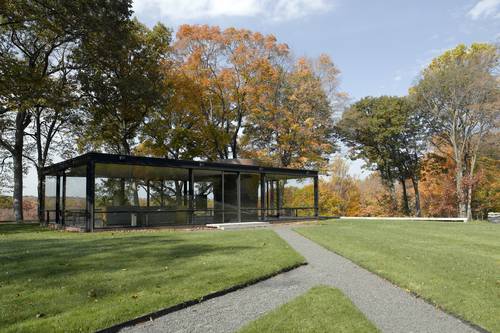 Everett Collection Inc. / age fotostock
1 Photo
AAA Editor Notes
The Philip Johnson Glass House offers tours departing from the visitor center at 199 Elm St. On the 49-acre site is the former private residence of architect Philip Johnson, who designed the Sony Tower and the Seagram Building in New York City as well as the Christ Cathedral in Garden Grove, Calif. The 1949 glass house was Johnson's home until his death in 2005. As the name implies, the house has a design consisting of four glass sides, allowing views of a pond and woodland area to be seen clearly from inside. David Whitney, a curator, avid art collector and friend of Johnson's for nearly 50 years, planned the landscape design.

The Painting Gallery contains 23 large-scale works by such artists as Robert Rauschenberg and Julian Schnabel. Particularly notable are the eight works by Frank Stella created between 1960 and 1973. The Sculpture Gallery features works by Rauschenberg, Stella and other artists.

During 1-hour and 2-hour tours visitors can see a portrait of Johnson by Andy Warhol and exhibits honoring the accomplishments of renowned architects, as well as outdoor pottery displays and visits to underground art studios.

Note: Each tour is limited to 15 participants. Tour tickets must be purchased in advance and be presented at the visitor center for tour admittance. Limited parking for visitors with special needs is available at the visitor center. Transportation from the center to the house is provided. Arrive at least 20 minutes prior to the scheduled departure time.