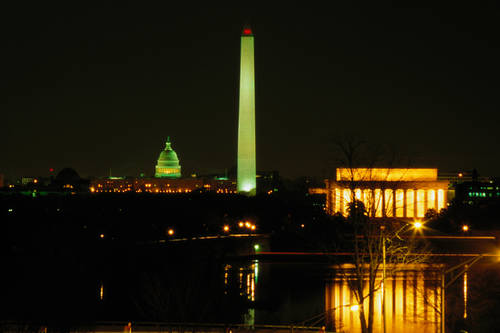 Getty Images/Hisham F Ibrahim
1 Photo
AAA Editor Notes
National Mall extends from 3rd to 23rd sts. N.W. between Constitution and Independence aves. It was originally envisioned as a formal park in the grand L'Enfant Plan for the city of Washington. Crisscrossed by broad gravel paths lined with benches beneath stately American elm trees, this grassy expanse is the place in the city to congregate, especially if you're a tourist.

The Mall is the dividing line between D.C.'s Northwest and Southwest quadrants and is divided into two separate sections by 14th Street. The long rectangle between the United States Capitol and the Washington Monument grounds is lined on both sides by 10 Smithsonian museums and the National Gallery of Art's East and West buildings. The most recent addition is the National Native American Veterans Memorial adjacent to the National Museum of the American Indian.

On any given day, unless the weather is unusually inclement, an endless parade of humanity—residents, office workers, school groups, joggers, cyclists and visitors from around the world—treks from one end of this broad expanse to the other.

On the east side of the Capitol Reflecting Pool, across from the Capitol grounds, is the Ulysses S. Grant Memorial. An equestrian statue of the Union general and 18th president stands atop a marble base, flanked by four bronze lions in repose. The sculptural groups on either side of this statue are called Cavalry Charge and Artillery, and both are noteworthy for their powerful depictions of battle.

West of 14th Street in West Potomac Park are the Washington Monument; the Lincoln, Korean War Veterans, World War II, Martin Luther King, Jr. and Vietnam Veterans memorials; and the Lincoln Memorial Reflecting Pool, a long, narrow rectangle. The total distance between the Lincoln Memorial and the Capitol grounds is a little over 2 miles; this panorama is most impressively viewed looking east from the top of the Lincoln Memorial steps.