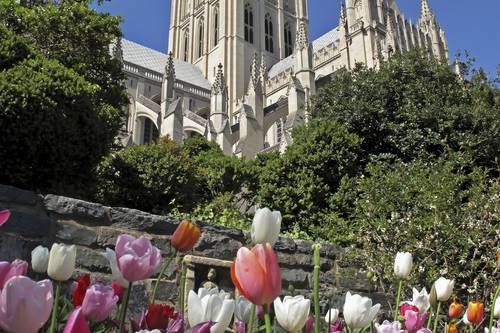 Coast-to-Coast/iStockphoto.com
1 Photo
AAA Editor Notes
Washington National Cathedral is at 3101 Wisconsin Ave. N.W. at Massachusetts Ave. N.W., atop Mount St. Alban. Officially the Cathedral Church of St. Peter and St. Paul, it serves as the chief mission church of the Episcopal Diocese of Washington. This spectacular example of Gothic architecture, one of the world's largest cathedrals, was completed in 1990 after 83 years of construction.

The architectural design is loosely based on the 14th-century English Gothic style and was built stone on stone, with no use of structural steel. The doors at the west entrance open onto the narthex; the interior is shaped like a cross, with twin transepts flanking the Gloria in Excelsis Tower, adorned with 388 carved angel heads. The top of the tower contains both a carillon and a 10-peal bell and is the highest point in the District of Columbia.

Among the many beautiful decorative features are three rose windows—round stained-glass windows with stone traceries dividing them into petal-like sections. Thousands of small stone carvings cover the exterior. Gargoyles, carved so that water spouts out of their mouths, and grotesques, carved so that water drips off of their noses, both act to divert precipitation away from the building.

After being awed by sheer scale and grandeur, come back down to earth with a restful stroll through the Bishop's Garden, enclosed by stone walls. Inside are winding paths, rose and herb gardens, magnolia and yew trees, boxwood hedges and weathered arches.

The 2011 earthquake that rattled the Mid-Atlantic region caused significant building damage, including broken and twisted pinnacles, cracked stones and mortar, and damage to flying buttresses. Ongoing restoration work can take years to complete, and scaffolding still covers sections of the exterior.

Note: The National Cathedral is at least a 6-block, uphill walk from the Cleveland Park Metro station. A parking garage is on the cathedral grounds. Parking restrictions apply in the surrounding neighborhood. Varying levels of security or special worship services may affect public access; phone ahead to confirm schedule.