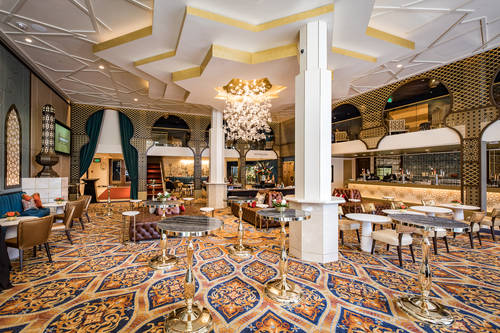 Fox Theatre/Alive Coverage
1 Photo
AAA Editor Notes
Fox Theatre, 660 Peachtree St. N.E. (MARTA: North Avenue station), stands tall as a tribute to the heyday of the grand entertainment showplace. The “Fabulous Fox” was built in the late 1920s as the headquarters for the Shriners organization and was originally called the Yaarab Temple Shrine Mosque. It opened to great fanfare on Christmas Day 1929, changed ownership several times thereafter and came perilously close to demolition in the 1970s before a concerted grass roots effort to save the building prevailed.

Today the Fox retains all of its lavish trappings, from the imposing lobby to Egyptian-themed decorative accents to the breathtaking nearly 4,700-seat performance hall that resembles a huge Arabian courtyard, complete with a starlit ceiling and floating clouds. It's the most lavish setting in town for Broadway shows, music concerts, comedy shows, ballet performances and such special events as showings of “Gone with the Wind.”

One-hour guided tours of the historic building are offered. Specialty and holiday tours also are available. Tickets for all performances are available at the Fox Theatre box office.