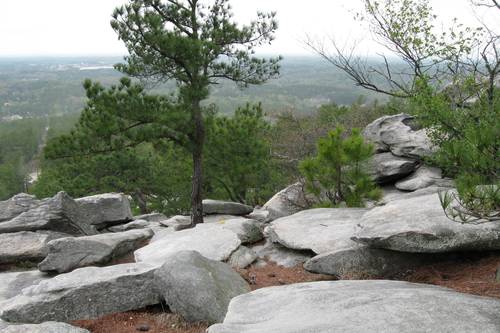 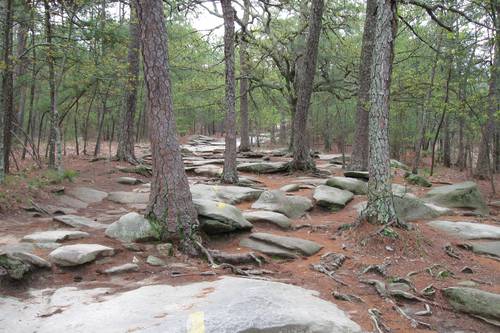 AAA/Greg Weekes
2 Photos
AAA Editor Notes
Stone Mountain is off US 78 exit 8 in Stone Mountain Park and is encircled by Robert E. Lee Blvd. The park's namesake and focal point is a massive dome of granite 1,683 feet tall that rises some 825 feet above the surrounding region. It was created around 300 million years ago (at the same time the Appalachians were formed) when heat and friction resulting from the shifting of the earth's crust produced magma, or molten rock, that then slowly hardened. Buried for millions of years, the dome eventually became exposed through erosion and the passage of time.

Bowl-shaped rather than craggy, Stone Mountain is an unmistakable landmark. Its lower slopes are forested with scrubby loblolly pines and Georgia oaks, but the summit is bare, pocked with depressions that give it an eerie resemblance to a lunar landscape.

It's a relatively easy (i.e., not that steep), 1.3-mile trek to the top via a designated trail; on clear days the downtown Atlanta skyline is plainly visible, and sometimes even the distant Appalachians can be seen. Wear nonslip shoes and bring your camera. You can rest, refuel and enjoy the panoramic views at the Top of the Mountain snack bar before heading back down.

Carved into Stone Mountain's sheer north face is an enormous bas-relief sculpture of three major Civil War figures—Confederate president Jefferson Davis, Gen. Thomas “Stonewall” Jackson and Gen. Robert E. Lee. An amazing feat of engineering, it's the size of a city block but still looks small compared to the mountain's massive bulk. It was begun by Gutzon Borglum, who later went on to complete the carving at Mount Rushmore. It also took 57 years to finish, and that included a 36-year hiatus. The figures are illuminated at night, creating quite a stirring sight.

The hiking trail to the top of Stone Mountain begins near the Confederate Hall Historical & Environmental Education Center, at the junction of Robert E. Lee Boulevard and Memorial Drive.

The story behind this work of art is fascinating. The day-to-day labor was carried out by quarrymen who had to stand on open, wind-whipped scaffolding 33 stories above the ground. Roy Faulkner, the chief carver who finally brought the sculpture to completion, never had a formal art lesson but displayed a mastery of the thermo-jet torch, which enabled carvers to exact fine details while still blasting away huge amounts of rock.